I managed to accomplish my aim, but only just. When I crossed the finish line of the City to Surf this morning I stopped the clock at 54:59, just a second inside the requirement for “running my age” – that is, to finish in 54 “something”. I felt reasonably good throughout, but it was hurting from Heartbreak Hill onwards. I haven’t seen the official time from the electronic sensor mats yet, but it might even be 54:58, as I started my watch just before I crossed the starting line sensor.

I reached 5 km in 19:08, which I was pretty happy with, given there are some decent hills in that first section. Even more satisfying was getting to the top of Heartbreak Hill and the halfway point in 28:16. The first half is much harder than the second half. I then hit the highest elevation of the race at the 10 km point in 39:40. I felt I faded a little from there, but luckily still got in just under my self-imposed cut-off time with a sprint down the home straight. That means I ran the 7 km of the second half in 26:43.

I feel the above times are reasonably good regardless, but when the extremely hilly nature of the course is factored in, I really am happy with the pace. Overall I averaged about 3:55 per km. It certainly felt a whole lot faster than the pace at which I ran around the world – almost twice as fast. More on the race tomorrow.

The world run photo for today is another from New Zealand, taken on Day 4 of 622 in the Central Otago region. New Zealand is quite dry in this area. 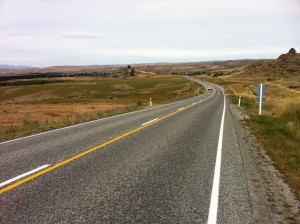 A quick update. As some have surmised, I am actually back in Australia for a short break. You will also n0tice this if you have a look at the tracker.

I didn’t reveal this previously, as there were certain people I needed to surprise (which has now occurred).

In a couple of days I’ll post another update regarding the recommencement date of my run in the US.

I finally got to run on a quieter road today, moving off the Duke’s Highway. Besides the extra traffic, the Duke’s has a rough surface of sharp stones. Once on the road to Frances, however, it was much quieter and smoother – much easier on the feet.

After a radio interview with ABC Illawarra in Bordertown this morning, I enjoyed my run on a course that holds fond memories. In 2010, this was the road where Lance and GD made a break 30 km out from the town of Frances, and the pace was on. They took turns at the front, as we averaged 50 km per hour. Reefton Humblewood was dropped very quickly, as Big Andy, Chips, and myself hung on as best we could. The amazing thing, though, was Jimbo’s performance. He missed the initial break, and so, set about bridging the gap on his own. He passed Reefton, who was immediately spat out the back again. Jimbo eventually caught the lead break just a few kilometres from the end in Frances. We had ridden 30 km in 37 minutes, thanks to the cracking pace of Lance and GD, and Jimbo would have been even quicker. I was much, much slower over the same course today.

There were so many birds around the road today, mostly sulphur-crested cockatoos. The noise was deafening at times, as they protested my presence. But ……. there was something more disturbing that emerged today – something that strikes fear into the hearts of cyclists, and even more so for runners. Magpies!!!! Magpie breeding season is usually around September and October, when they protect their young by swooping on and attacking humans, often drawing blood. I was swooped upon twice today, and once last week. It looks like the season is getting earlier every year, but the start of August is a new record for me. I may have to start looking at strategies to ward off the dreaded magpies as I near the end of the run. They will surely be worse by then.

I also managed to figure out the Garmin issue today. I did many experiments over distances that were known by the kilometre pegs that had been verified by the support vehicle’s odometer. When I had the Garmin in my hand, it often measured up perfectly with all the other measurement methods. However, almost every time it was in my pouch, carried right up against my body, it began to “lose distance”. It seems that being so close to my body prevents the satellites from “seeing” the device properly. I have added in the missing data from today – 530 metres – but from now on, I will carry the device in my hand to increase accuracy. It’s a bit annoying, but necessary. I did discover, however, that the device also works properly when carried on my head, under my cap. But this was awkward and impractical.

Tomorrow I continue on to Naracoorte. Stay tuned for the story of how Chips won the day.