I’m still having a few issues with my left calf. It’s consistent with previous calf strains I’ve had – one part of the muscle seems to heal but the problem then moves to an adjacent section of muscle, gradually migrating its way up or down the calf until almost the whole muscle has gone through the same process. It doesn’t stop me from running, but I have to jog very slowly. I’m simply treating it as bit of a rest phase in my training after the recent ultra in Florida.

I saw a segment on TV this morning where the presenter was evaluated for his fitness and “biological age”. One of the metrics derived was his VO2 max, which is the ability of the body to absorb and use oxygen. I’ve only ever been measured for this once, way back in 1991 when I was probably as fit as I’ve ever been, prior to an Ironman triathlon. I recall the technician being impressed with the 81 I scored. He said that was very high, but it didn’t really register with me as to what that meant. I simply didn’t have anything to compare it to.

Today the TV presenter’s VO2 max result was 58. It’s the only other value I’ve been made aware of, but it didn’t surprise me that his might be below mine, given he doesn’t run in ultras and such like. However, the fitness expert said his result was also above average. It made me realise I didn’t have much idea of what a good or bad score is in terms of VO2 max. I’ll have to do a bit of research to learn more about it.

The photo today was taken near Glenrowan in Victoria during the latter days of my run around the world. The canola was looking good. It’s a region I am very familiar with from the several Tour de Bois routes that have passed along this same road. Whether it’s running or cycling, it’s a very nice part of the world in which to be travelling. 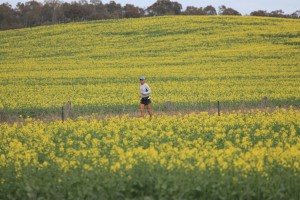