As I’ve mentioned earlier, the core strengthening exercises I’ve been doing (which have cured my hip issue) have also resulted in my “base pace” – the normal speed at which I run comfortably – getting faster. I guess I’m more balanced muscularly and, therefore, able to naturally put more of my effort into propelling me along the road. I’m now well placed to launch into the New Year and attack those races I have on my agenda.

I took this photo at a memorable point in my world run. At nearly 4,000 metres (about 13,000 feet) in elevation, not only was it within a 100 metres from where I nearly fell to my death over an ice cliff, but it was also the highest point I reached during my run around the world – the Cristo Redentor Pass in the Andes, on the border between Chile and Argentina. This was at the top of the ridge, with the road dropping off rapidly in both directions. 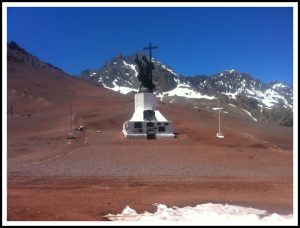