Happy Christmas to everyone. I hope you’re all looking forward to the New Year as much as I am.

I’ve actually decided I’ve been taking it too easy of late and I need to work a bit harder. I’m the heaviest I’ve been in 12 years. So today I began my fitness program for next year a week early. As part of a 16 km run, I threw in a bit of speed work. Actually, it was a 1 km effort in 3:50 and a 200 metre sprint in 42 secs. The funny thing was, it wasn’t my legs or lungs that were stressed – it was my arms. They felt the same as I recall my arms feeling during 400 metre races. So it appears I need a bit of upper body work too.

Overall, however, I felt good today and it was a great start to my campaign to be fit enough for the King Island 32 km race on March 12. Of course, that will be followed by the Oxfam 100 km in Melbourne in April and, hopefully, the Great Red Run in the Simpson Desert in late June. I’ll also be cycling in Europe in August.

Today’s photo is to contrast the me of today with the me of the world run. In this photo I’m about 14 km lighter than I am right now. I won’t be like this for long though. 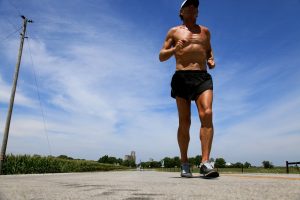