I did another mild speed work session this morning – just some untimed fartlek, but it was worthwhile all the same. I’m going to try to get back to my old routine of two fast sessions per week and one long one.

I’ve been looking into some of the races I’m keen to do this coming year, most notably the Big Red Run in the Simpson Desert. It’s a six day stage race; something I’ve never done before. There are some elements of the race I don’t agree with, such as the mandatory requirement to carry electrolyte supplements. I certainly won’t be using any. Once each stage commences I’ll probably just hand mine to some other competitor. Runners also have to carry a lot of other stuff that I won’t personally need (such as torches and space blankets in case you take too long on a stage and end up running during the night). But the organisers have to cater for all contingencies, so I can live with that.

I’m posting a few of these “skinny me”photographs from the world run for a simple reason – to motivate me to get back to something like the same. If I can achieve this goal, I’ll be well placed for a decent performance in these upcoming races. 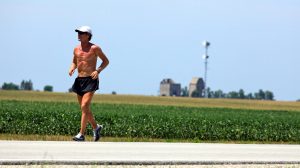