By this date in 2012, I was nearing the end of my first two continents of the world run, being only 100 km or so from Buenos Aires. I had covered more than 15,000 km for the year to that point and was feeling stronger all the time. Catch the posts from those days below.

There was still quite a bit of long grass running today, but at least I had a tailwind. Once again, it was a day of flat and straight roads, with a lot of traffic, particularly this afternoon. I think it was the weekend traffic out of Buenos Aires. It’s toughening me up mentally for the Nullarbor, which, while just as flat and straight, should be a bit lighter on the traffic. In the interim, however, I’m really looking forward to the quiet back roads in Europe.

Carmel decided there was nothing new to photograph today, so she didn’t take any. She’s hanging out for some different scenery. I’m sure it will come.

Well, that was quite an eventful day!!!

It started with more running in the long grass of the shoulder, but after a short while I decided to simply stop and step into the grass when traffic came along. It was slow going, but my legs appreciated it.

After only 3 km, I noticed a disused road, which the Google Earth satellite image showed as meeting up again with the main road later. I took this option, mainly to get in some running without traffic. It was always going to be a risk. I reached a point where a former bridge had been removed in favour of a rushing river. I thought about trying to cross it, but the torrent of water (which I estimate was moving at about 5 metres/sec), coupled with the fact there was a barbed wire fence right in the middle of the stream, made my mind up for me. So I had to go back. It was, to be precise, 970 metres back, and I have subtracted the 1.94 km in total from the Garmin data for the day.

About an hour down the road, I got a call from Carmel, who had driven in front. She had locked the keys in the car!!!!! By the time I ran up to where she was, a truckie had come to the rescue. With some wire, pliers, and a screwdriver, he made short work of the problem, and the car was soon open. It could have been so much worse! He was a great guy, and hugs were exchanged all round, as well as email details. He actually looked a lot like Will Ferrell.

A little later I saw an enormous black pig that was dead on the side of the road. It had been hit by a car or truck – not a pretty sight.

I ran on through the heat of a quite warm day, although I wasn’t particularly bothered by it. It was a dry heat.

In the town of Chacabuco, I saw a memorial to many people who had died in the 1970s at the hands of the military dictatorship in Argentina. Thankfully, it’s nothing like that now.

To finish, I’d like to mention where we stayed last night in Junin – the Piedramora Hotel. It was top-notch, and the food in their restaurant was superb and amazingly good value. For the equivalent of AUD$12, one could have a truly delicious and huge eye fillet steak, of the best Argentinean quality.

On top of this, there was also “entertainment”. When I ran past the hotel earlier in the day, I noticed lots of young girls out the front. When we returned after I finished running, they were still there. Later, when we went down to dinner, they were STILL there. Then, around 9:30 pm, we found out why. One of Argentina’s most famous young pop stars was staying at the hotel, and left the establishment through the throng of girls to get into a white limo. He signed autographs and was off – to perform in town that evening. Later that night – I’m guessing about 2 am – we were awoken by more screaming and shouting when he returned. By the way, his name was Axel. Something a little different for a Friday night.

Many parts of the road today were lined with eucalyptus trees. I assume they have been introduced from Australia. The smell of the gum leaves in early summer, coupled with the landscape of wheat fields, had me thinking I was in central NSW, on my way to the Gooloogong Hotel.

Well, I spoke too soon! As I left town this morning, the paved shoulder immediately disappeared. It was back to grass and dirt. However, heavy overnight rain had turned the dirt into a sticky surface of mud.

If I wasn’t lifting my knees high to run through the long grass, I was slipping and sliding in the mud, ending up with it caked on my shoes. The shoes were often three or four times their normal weight, until I scraped the mud off.

And then I had a fall. I was enjoying a brief moment on the road, and was twisting to the right to look over my shoulder, when I tripped on something. This meant I came down with all my weight on my out-stretched left hand. I felt two things – the skin being scraped off my hand, and the force of the fall being transferred up to my shoulder and collarbone. I quickly rolled off the road to avoid on-coming cars.

I thought I had broken the collarbone, but it turned out to be OK. I did lose a bit of bark from my hand, though. My shoulder is sore, but I’ll survive.

Although it didn’t return to being paved, the road shoulder (there are a lot of shoulders in this story) did improve to fine gravel. This helped, but the day got progressively more humid. I even had to take my shirt off – the first time since the heat of the US summer. By the end of the day, I was very hot and sweaty. But I’m now less than 100 km from Buenos Aires.

Carmel is compensating for the lack of photo opportunities by doing a lot of walking during the day. I reckon she is averaging nearly 10 km per day lately. Pretty impressive! 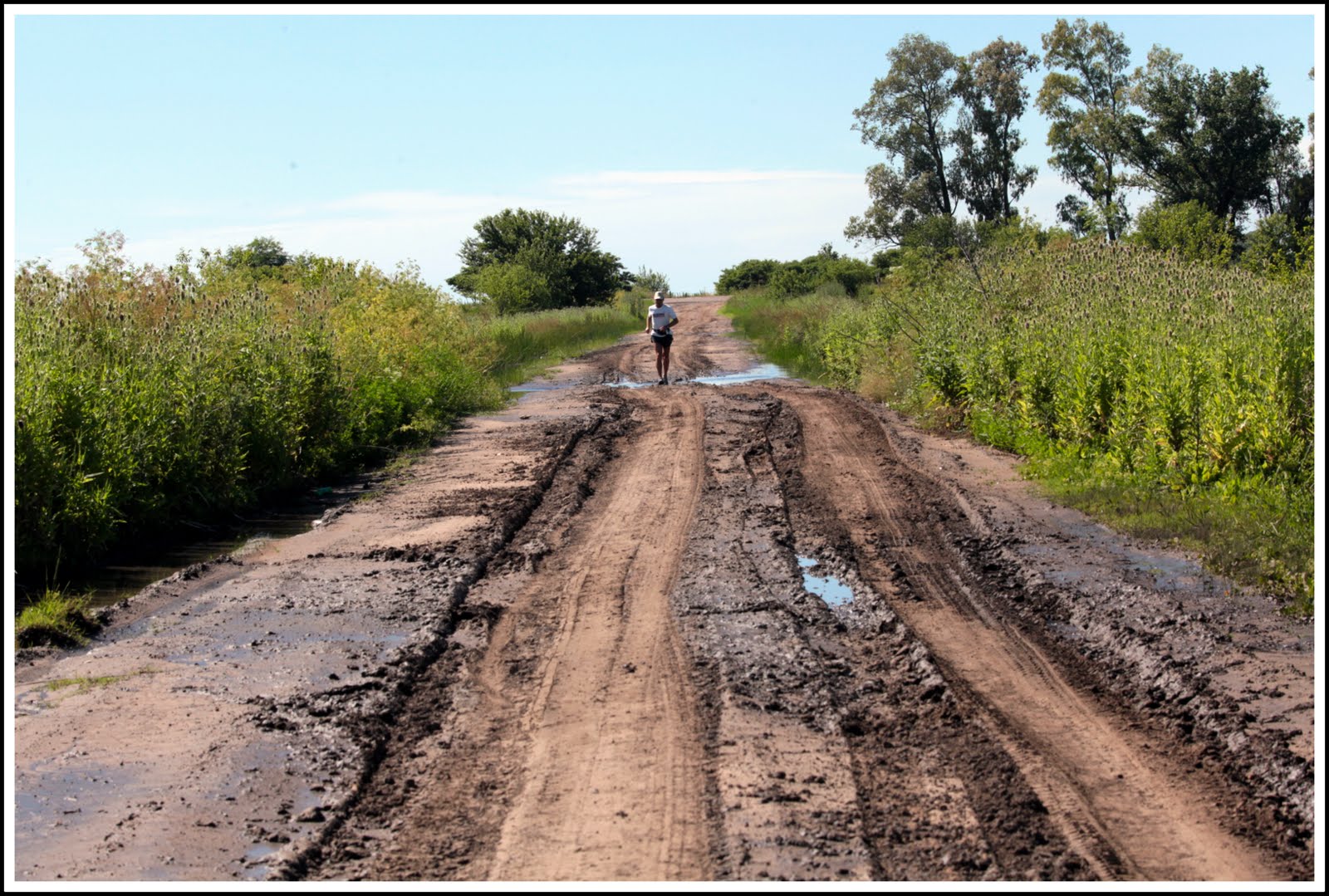 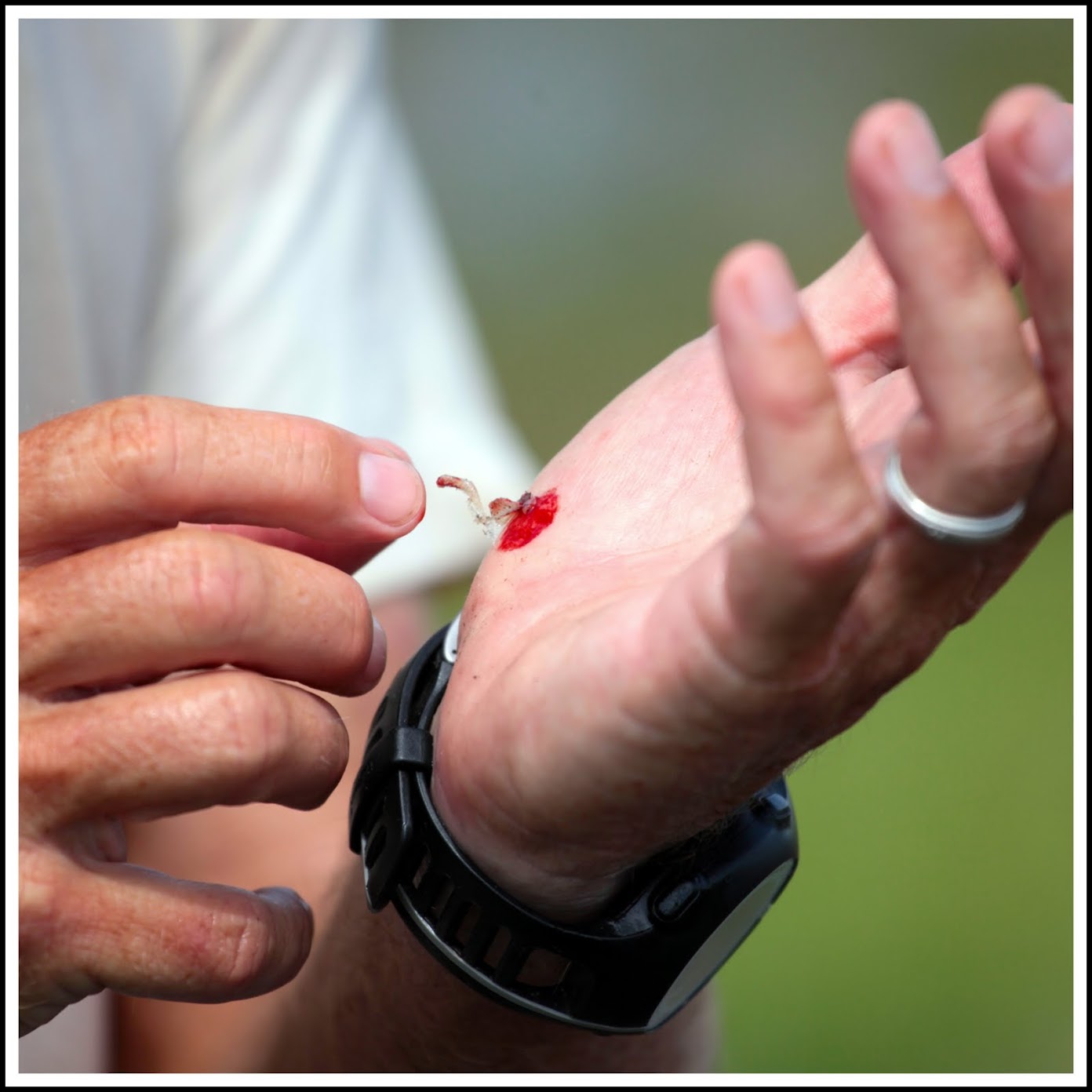 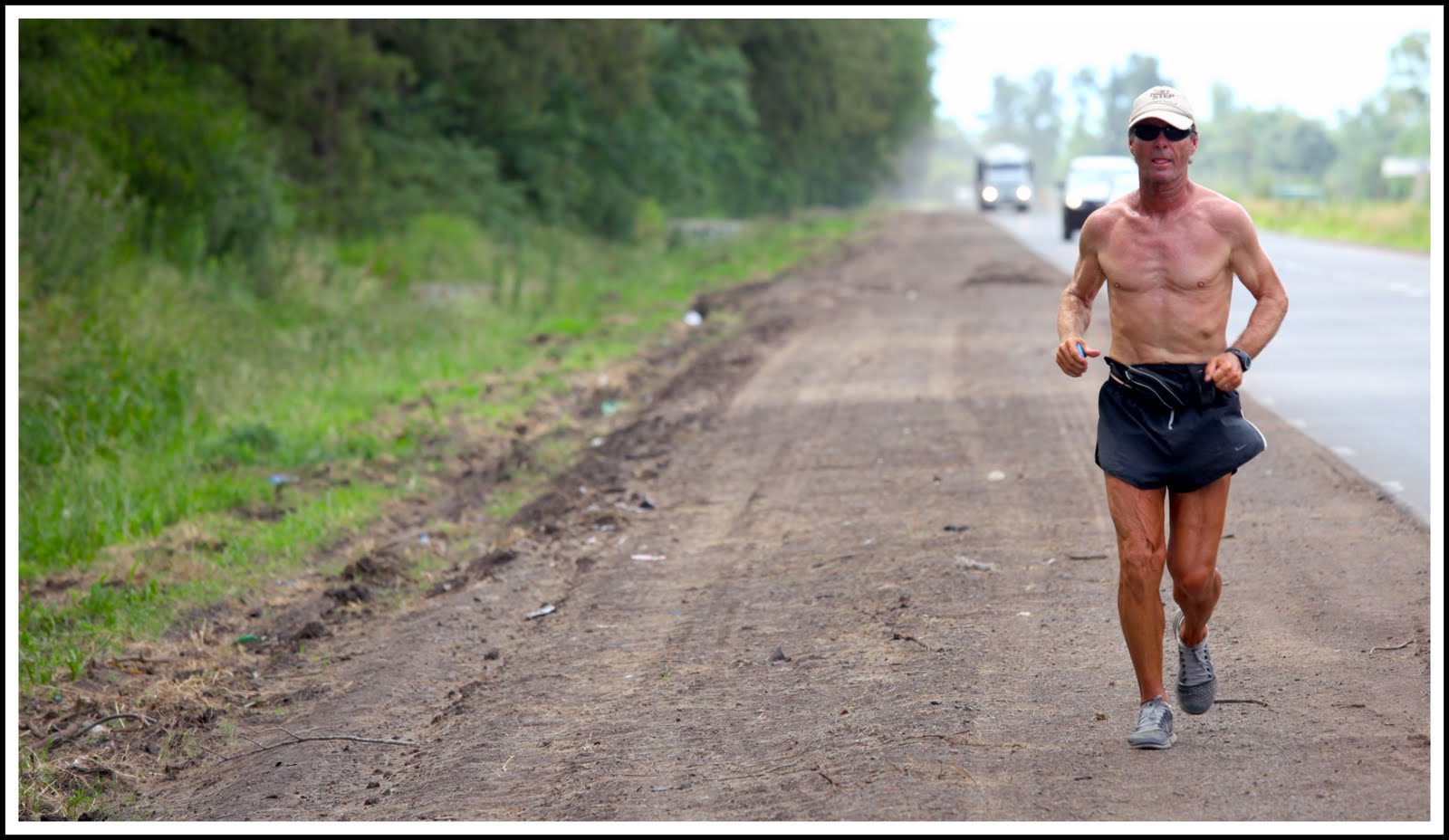