I’ve managed to achieve my goal of running 5,000 km for the year, reaching that mark this morning at Somers on the Mornington Peninsula. For a change, though, I’ve cycled more this year than I’ve run, but only by about 100 km, thanks mainly to the five weeks of touring through Europe in the middle of the year. Last year I ran more than I cycled and drove combined. But this year I’ve driven less than I’ve run or cycled, so that’s become a trend these past few years.

Its been a successful year from a running perspective. I only competed in two events, but I was very happy with the results of both. In the King Island Imperial 20 (32 km) in March I placed 2nd on handicap (I think I was fifth fastest overall), and in the 250 km Big Red Run in June I was fortunate enough to place 3rd overall. Both performances were better than I expected. And to top it off, I set a new PB in August for the climb of Mont Ventoux in France, taking 1:45 (average speed of 12.6 kmh) to ride from the main intersection in Bedoin to the summit.

The latter part of the year has been frustrating, with both the high hamstring problem and the Achilles (the two are related) slowing me up. But I’ve taken steps to correct both issues, and I should be back to a reasonable level of fitness for this year’s King Island race in March.

To cap off the year, here’s a photo I posted back in August from when Dave, Peter, and I had just made it to the summit of the Stelvio in Italy (the Swiss border is just a couple of hundred metres to the left of the photo). I was very pleased to ride this monster of a mountain (part of which you can see below) in 2:07, averaging 11.6 kmh. 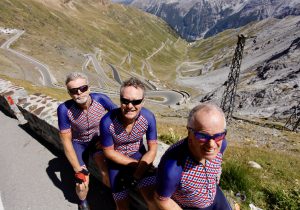