I totalled 100 km last week, with a noticeable improvement in my hip. However, it still niggles a bit on occasions and is lingering longer than I’d like. But at least it doesn’t stop me running, so I can’t complain too much. Things could be much worse.

Back on Feb 14, 1983, I began logging my daily run mileage. I did so by writing the number of kilometres each day into a small diary. Back in 2008 I had Grace, my daughter, transcribe all this data from the diaries into a spreadsheet (don’t worry, I paid her well). Since then I have all the stats about my running at my fingertips. There are all sorts of interesting (and boring) statistics that are contained in the spreadsheet.

The point of telling you this is because a few days ago I randomly noticed that the total number of days since I started logging my runs had reached 12345 days. Just a meaningless number, I know, but it did stand out more than other random numbers. That’s nearly 34 years of running. In that time I’ve totalled more than 142,000 km and averaged 11.538 km per day. And it’s now almost 4,500 days since I’ve had a day off from running. I’m sure it’s this sort of consistency that allowed me to run around the world.

Keeping with the Argentina photo theme, here’s another from the long straight highway that spans between Buenos Aires and Santiago on the other side of the South American continent. It was a bit mind numbing at times, but pretty easy running for the most part – except when I had to run in long grass on the side of the road with the snakes and giant lizards. 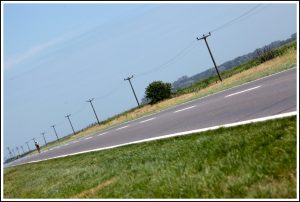 I am going to make this short tonight. We are guests of Mauro and his family, who we met a couple of weeks ago in central Argentina, and I don’t want to be anti-social.

Tune in tomorrow for a full account of today’s run, and the plans ahead.