Despite a super hot day today (38 C, 100 F) I decided to stick with my plan to do another fast lap of Centennial Park. I was pretty comfortable throughout, although I did feel it a little in the lungs.

I completed the lap in 15:50, which was 31 seconds faster than I ran it eleven days ago. And, on Feb 12 two years ago I did a lap in 15:35, although it was much cooler that day. A fifteen second difference is to be expected given the heat and humidity today.

On the matter of heat, I find I seem to tolerate it while running, only feeling the effects of running in such conditions after I stop. I am guessing this has to do with all the running I did in extreme heat during my world run. I think I must have developed a mental capacity to cope with the heat during that time. And Carmel was there to provide drinks and ice towels to cool me down, so the physical suffering was minimised. Now, however, I seem to cope mentally with the heat, but it really hammers my physically. I don’t realise this while I’m actually running. But when I finish, especially when it’s a fast run, I really notice it.

Here’s another great photo from the Rockies in Colorado. I was running at about 8,000 feet of elevation, and the mountain in front of me was over 14,000 feet high. As you can see, the road was very quiet. You can’t get better running conditions than this. 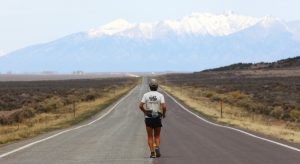 It turned out there was some sort of festival on – something to do with Lent – and the whole town was out for a feast. So we had to take the next best thing – tapas. A nice barman, Jose, realised our dilemma, and kept plying us with whatever tapas was remaining, while all the townspeople headed off to their various restaurants for dinner. We had sausage, tortilla, chips, calamari on bread, and some things I have no clue about. I thought I’d feel a bit below par today because of it, but I actually felt very good.

I’ve done some more research on antipodal points, and when I was a short distance from Avila, I reached a point which was precisely on the other side of the world from a road I ran on just north of the town of Levin in NZ. It was strange to think that, directly below me – about 12,800 km through the centre of the Earth – was that same road I ran on just over a year ago. Except that I was then running upside-down or am I now running upside-down?

I found the town of Avila a little disappointing. In 1986 the old walled town stood out clearly, with little that was modern obscuring it. Now it’s difficult to see the old town for all the new buildings. The ancient walled town still exists, but you have to go looking for it. While there, I ducked into a Burger King to use the toilet. Despite it being lunchtime, there was only an old American couple in the place. Never seen such an empty hamburger joint.