I hit snow on this day back in 2013, as I was running through central Spain. At least I had long pants to run in, which I didn’t have when I first struck snow in the US the year before. The posts and photos below will give you a sense of it.

Without really trying, I’ve noticed my mileage is higher so far this year than at the same time last year, even though I thought it would be lower given my sore heel. It’s still only early yet, but at least it’s a positive sign.

Today was by far the hilliest so far in Europe, with a mountain top finish to boot. And as is usually the case with mountain stages, it was quite picturesque.  But the heel didn’t appreciate it. It flared up a bit toward the end of the day, but it’s not too much of a problem just yet.

It was also a cold day, to the point that I wore my gloves – the ones Libby gave me for my birthday, almost a year ago in California. It was nice to be warm.

I also ran across a large dam wall. The view from the surrounding hills was quite stunning as I approached the dam. From there, it was all uphill to the finish at the town of El Barraco. That’s when the heel started to feel it. I haven’t run this far uphill since I ascended the Andes last November.

And I passed an interesting milestone today – I now have less than 10,000 km to run to complete my journey around the world. That means I’m now down to single figures.  Woo hoo!!!!

It turned out there was some sort of festival on – something to do with Lent – and the whole town was out for a feast. So we had to take the next best thing – tapas. A nice barman, Jose, realised our dilemma, and kept plying us with whatever tapas was remaining, while all the townspeople headed off to their various restaurants for dinner. We had sausage, tortilla, chips, calamari on bread, and some things I have no clue about. I thought I’d feel a bit below par today because of it, but I actually felt very good.

I’ve done some more research on antipodal points, and when I was a short distance from Avila, I reached a point which was precisely on the other side of the world from a road I ran on just north of the town of Levin in NZ. It was strange to think that, directly below me – about 12,800 km through the centre of the Earth – was that same road I ran on just over a year ago. Except that I was then running upside-down or am I now running upside-down?

I found the town of Avila a little disappointing. In 1986 the old walled town stood out clearly, with little that was modern obscuring it. Now it’s difficult to see the old town for all the new buildings. The ancient walled town still exists, but you have to go looking for it. While there, I ducked into a Burger King to use the toilet. Despite it being lunchtime, there was only an old American couple in the place. Never seen such an empty hamburger joint.

My first day of snow in Europe so far!!! It wasn’t so bad, as most of the snow occurred overnight, and what fell during the day was very light. And I’ll tell you something for free – Spain isn’t lacking in hills.

We awoke to a white morning, which is always a bit daunting. There was still some snow falling when I set off, but it let up soon after. The cold tailwind obviously helped make the running easier.

There wasn’t much to see en route, other than the white fields, until I reached Segovia. This is an old Roman town with a very impressive aqueduct, which is still in pretty good condition.

The remainder of the afternoon was spent heading north, out of town. The last 5 km was through a canyon on a very quiet and forested road. The trees and canyon walls shielded me from the wind, so it was relatively quiet and peaceful as the snow gently fell. 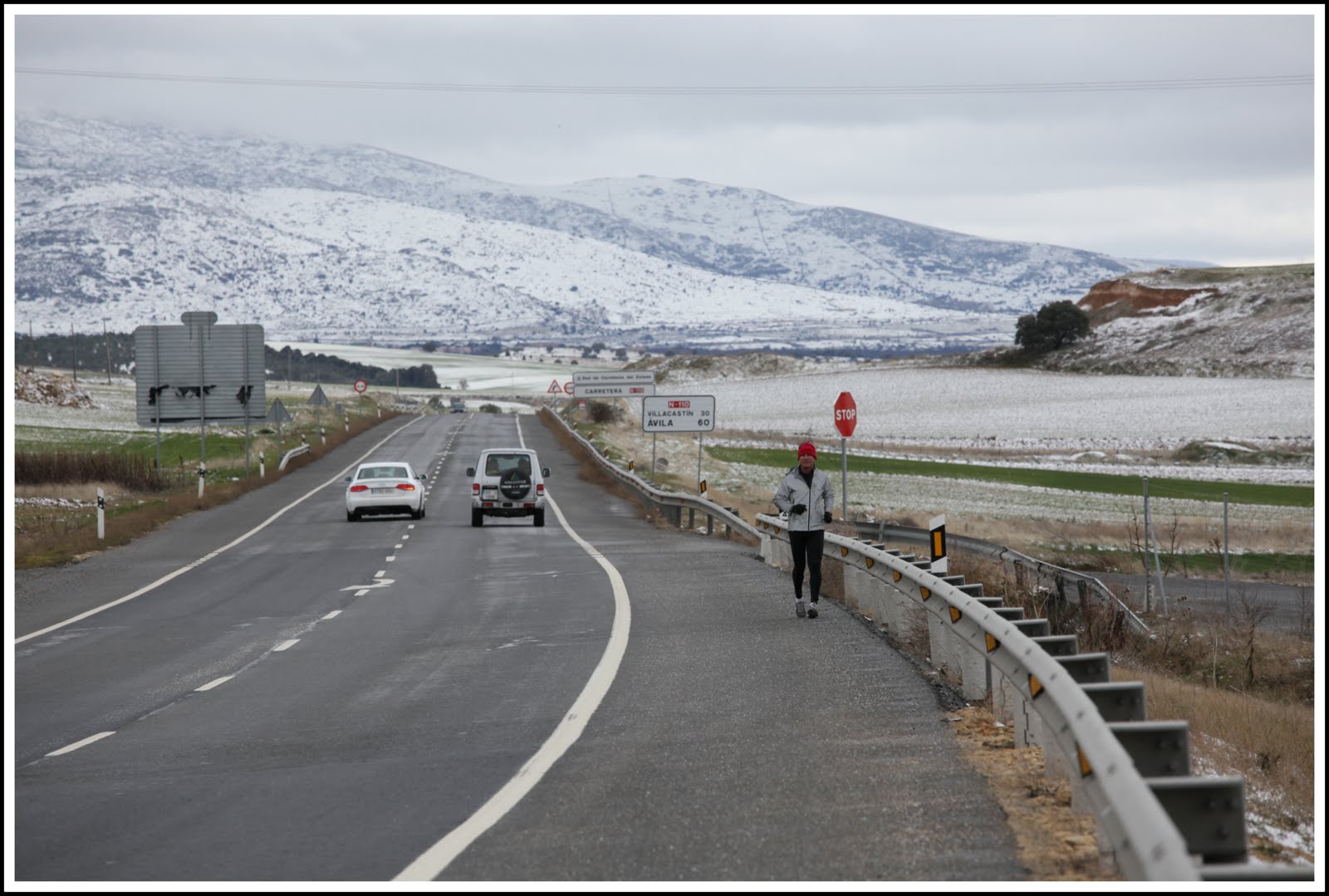 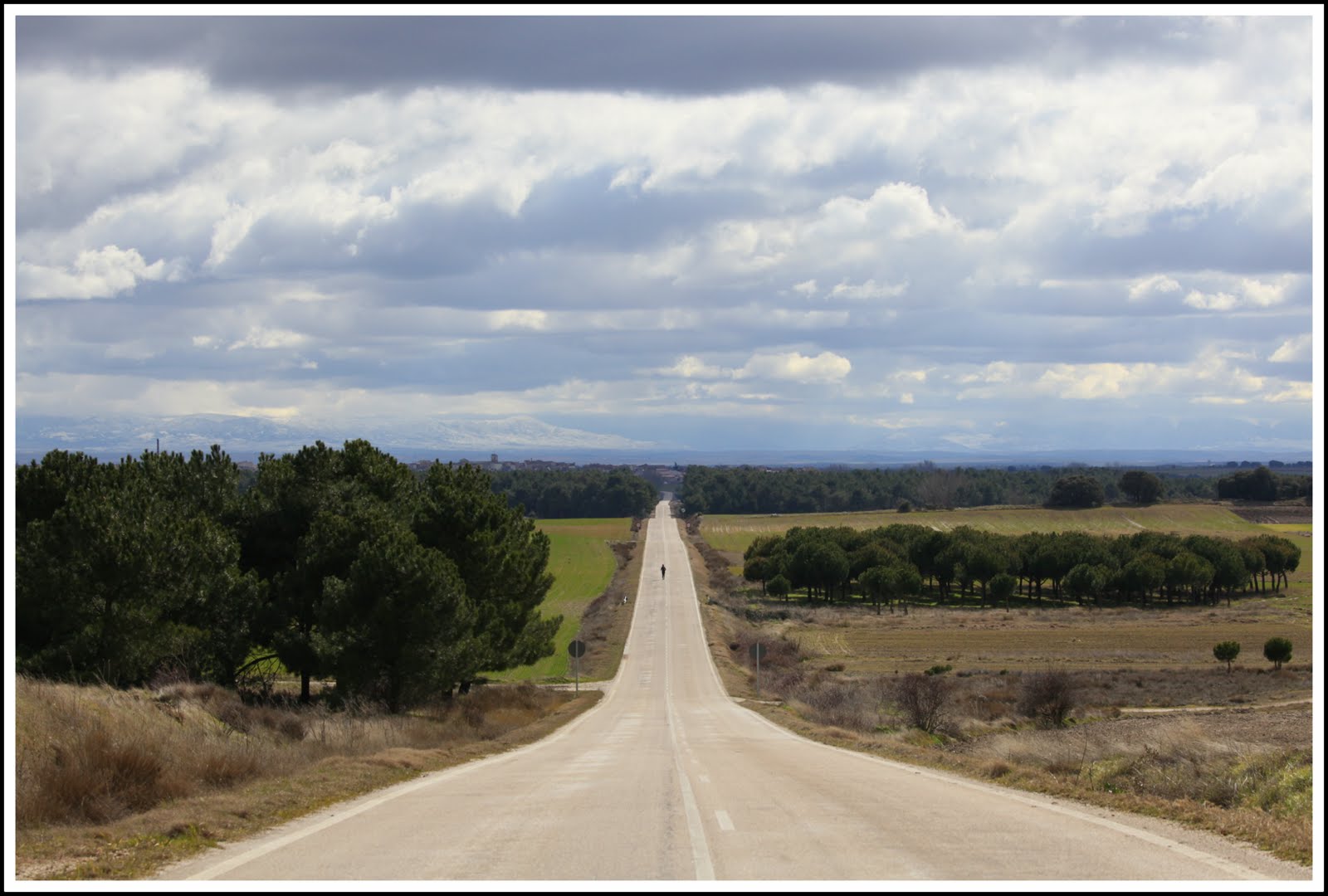