I’ve been trying to do a bit of walking lately, due to my inability to do much running. Doing so in Centennial Park amongst all the other walkers, it has become clear to me that I’m a very slow walker. I try to walk quickly but find myself being passed easily by women and men who seem to be doing it with ease. I guess I have a bio-mechanical weakness when it comes to walking. I have to put in a huge effort just to walk at 10 mins per km. I’m glad I never took up race walking.

Serge Girard is still powering along. As of yesterday he’d run 765 km in 11 days. He’ll smash the world record at that rate.

Here’s something a little different. The photo below was taken by Carmel the day I passed the 300 marathon mark on my run around the world. It was in the east of the US. She wanted to take the photo because my feet looked completely unaffected by so much running. That’s what happens when your feet get used to it. Honestly, I didn’t have a single blister during the entire 26,232 km. 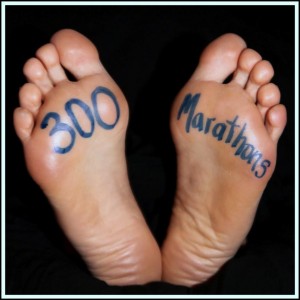 A good start to the North American leg, although a (planned) short day. It was a very casual run, with numerous long stops to look at the sights and play the tourist. I wanted to ease myself into the running again after five days off. I still haven’t recovered from the flights and time zone adaptation, and didn’t want to push it too hard at this stage. I have plenty of time yet to up the distances.

It was pretty much impossible to run from San Francisco Airport, as it meant crossing a really major freeway or running on it. That airport was certainly not made for people to arrive or leave on foot. So I did the next best thing and left from the centre of San Francisco itself.

I ran down to the bay and along to the Golden Gate Bridge, with great views of Alcatraz the whole way. There were large numbers of runners, walkers, and cyclists out for their Sunday morning exercise, and I was just another insignificant guy making up the numbers. Usually I am passing people in crowds like that, but today I was being passed. No problems – it was  my choice, and I have plenty of time in years to come to increase my speed again.

I finished on the coast, south of the city, at a BART station (Bay Area Rapid Transit), and caught a train back to the city. Tomorrow morning I’ll start at the same station. I have not gotten used to the five hour time zone difference yet, so I can’t see myself starting early for a few days yet. This might mean shorter days than I was doing in New Zealand, at least until my sleep patterns are back to normal.

One advantage of today’s route was that it gave the support crew an extra day of sight-seeing in San Francisco. They wanted to visit Alcatraz, but the tours were booked out – Sunday seems to be the busiest day. There are now three lovely ladies in the support crew, with Carmel’s friend, Jenny, joining us for a month. We had the pleasure of celebrating Jenny’s birthday yesterday, including dinner on Fisherman’s Wharf. We’re hoping that many other friends will join us from time to time for short or long stints of the world run.

For now, I’m off to Pier One to enjoy what I’m told is the world’s best chowder, although I think some of the people in New England might object to that claim.

PS I had to adjust the official distance today. I twice forgot to turn my GPS watch on after a stop, totalling a loss of 670 metres, and I also didn’t realise I couldn’t get under the Golden Gate Bridge at sea level and had to back-track, discounting a total of 820 metres. The net effect is that I needed to subtract 150 metres from the distance shown on the Garmin data. Therefore, the official distance is 28.56 km, not 28.71 km.

I also appear to have accidentally engaged my GPS tracker this evening, which places me at Pier One in SF. My actual run location at the moment is a little south of Daly City. This will be corrected tomorrow morning.

Finally, the time stamp in the margin of the blog list will probably be out by a day for some months now, as it is set to Greenwich time. It will have generally passed midnight (and be the next day) in Greenwich when I write each day’s report in the US.

My biggest day since April 23 last year. I wasn’t intending to run over 58 km, but we had a mix up with the maps at the end of the day, so I just kept going until I found Carmel and the car, and we did the 10 km commute to our accommodation.

The weather cleared up quite a bit, but it was still very cold at times. The snow is not melting quickly.

The terrain was flatter in general, but there were a lot of plateaus, with farming land being plowed ahead of the spring sowing. As always, there were many quaint little Spanish villages that I ran through. Every town seems to have several very old buildings that are falling down. And there were ruins along the way. It’s hard to estimate how long ago these structures were built – it could be a thousand years or more in some cases. After all, there have been buildings in these parts since before the Romans.

I’m a bit tired from the day, and behind schedule, so I’ll keep it short tonight. It’ll be interesting to see how I pull up tomorrow.