Yesterday morning I woke with a very sore lower back. I assume it’s a strain caused by some digging and shovelling I did on Saturday. This morning it was even worse – very painful. But I decided to go for a run anyway and see how it went.

The first couple of kilometres were tough, but then I warmed up and it wasn’t too bad. So I did the short speed session I had planned, which was exactly the same as last Monday – firstly 200 metres, this time in a fast 32 seconds, then 1 km in 3:36. I then finished with a relatively quick 4 km warm down. I was pleased with that, as it felt quite easy.

I’m sure my back will stiffen up during the day and become sore again. Hopefully it will be similar to past back strains I’ve had. They usually go away within a few days, but until they do, they are very painful.

This photo was taken by me early in my world run. It’s actually the Colorado River just south of the town of Blythe. It’s also the state border between California (which I was standing in) and Arizona on the other side of the river. You can see how much the dams upstream (such as the Hoover Dam) have restricted the flow of water. The Colorado is not much more than a stream these days. 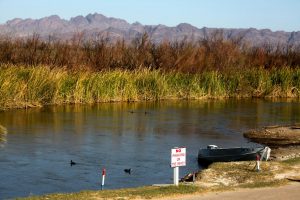 Distance today = 47.99 km; Total distance = 1970.95 km; Location = 3 km north of San Gregorio, California – 37 21.041′ N, 122 23.510′ W; Start time = 0949, Finish time = 1654
http://connect.garmin.com/activity/149483147
It really felt like winter today. The morning was particularly cold, although nowhere near snowing. The Pacific was far from pacified, and I should know – I ran beside it for much of the day. The coastline here is spectacular; a lot like the region south of Stanwell Park, but a lot more extensive.
I made it close to the town of San Gregorio before the girls picked me up. It was a good day considering the conditions. I have to admit, my quads are more sore than I expected. I suspect it’s because, after a four day rest, I have probably run faster than I have over the past month. This has resulted in me using muscles that have atrophied somewhat in recent times. I’ll adjust pretty soon.
The girls found a great little B&B for tonight in the town of Pescadero, owned by Peggy. Apparently the town used to be a long weekend destination in days gone by for San Franciscans who were willing to brave the “day long stage coach ride”. It has a lot of history, as well as a very interesting cultural diversity even now.
Tomorrow I head toward Santa Cruz.

The run today began in the fog, but it soon burned off to a partly cloudy day. There wasn’t too much fatigue from yesterday’s long run, although the legs were a little heavy late in the day.

I ran most of the day through the Duero Valley. It’s quite a wine region, and I finished the day in its capital, Aranda. I’m looking forward to trying one of the local reds tonight.

Penafiel, which I ran through early in the day, is certainly to be recommended to any tourist to the region. There are some ancient buildings, none better than a hill top castle in fine condition. There are several other hill top castles and forts in the surrounding area too. It makes for very enjoyable running.