My legs are starting to feel normal again. After an apparent relapse on Wednesday, I haven’t even had a twinge the past two days. But, as Bob Dylan opined, “Don’t speak too soon, for the wheel’s still in spin”. The signs are good, though.

Returning to the conversation from a couple of days ago – my slow walking pace. I don’t remember being a particularly slow walker in the past. But perhaps all the running I’ve done in recent years has changed my muscle balance and biomechanics, to the point where my walking muscles have suffered in favour of my running muscles. Of course, many of them are the same muscles, but there are important differences too.

Serge Girard has now completed the first two weeks of his world run. He’s chalked up a massive 981 km in 14 days. That’s an average of 70 km per day. Huge!!!

Here’s a photo from a batch I thought I’d lost. I took this from the road in Monument Valley, not too far from where the Forrest Gump scene was filmed. This photo hasn’t been seen before, though. 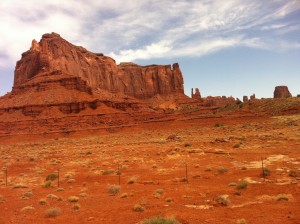 Another day running south along the Californian coast. Although not what I’d called a quiet back road, the traffic is relatively light, making for enjoyable running.

Early on I passed a hitch-hiker going the other way. He wasn’t having much luck and looked quite distressed as he asked me if I knew where the next water availability was – he was “parched as, bro”. I had come from the direction he was heading and I knew there was no water for many Ks, so I made a snap decision and and gave him all my water. I was going to get more in 13 km and knew I’d easily make it that far in the cool conditions (although, as it turned out, it was 18 km before I actually got my next drink). I’m sure he appreciated it far more than me, though.

Later I passed what I was told was the second highest lighthouse in the US. I would have thought the US had many taller lighthouses. The wind was picking up and was very strong by the time I finished. Luckily it was a tail wind. I saw lots of windsurfers and kite surfers as I made my way along the coast.

I have to say, I’m surprised at how poor the mobile phone reception is in this region. I hope it’s not the same throughout the US. Maybe it’s my carrier (T-Mobile)? I’ve gotten used to having good coverage in Australia, even in quite remote country regions – perhaps I’ve been spoiled.

After being out of range almost all day (which means the GPS real-time tracker does not update), I finally came into range and the girls called to tell me to drop into a berry farm just before the town of Davenport for a hot apple and strawberry cider “to die for”. A few Ks further on and I spied the farm and headed in. The owner ((I think) asked me where I was running, and I told him the story. He then kindly offered me the cider for free. It was truly delicious. If any reader is heading north of Santa Cruz, drop in to this berry farm just after the corner of the turn-off to Swanton. I believe the pumpkin curry is also amazing.

I finished the day about 12 km short of Santa Cruz, which is where we’re staying tonight. I didn’t have reception at the finish point, so couldn’t get the tracker to pin-point me at this location. I turned it on in town to give everyone a rough idea of where I am, but be aware that my true “running position” at the moment is about 12 km further west.

Tomorrow I head further south. I estimate that on Thursday I’ll reach the town of Carmel (Clint Eastwood used to be the Mayor of this town). Carmel will obviously be excited to be in Carmel.

I enjoyed running through the Ribera de Duero wine country today. The early weather was perfect – crisp and clear, with no clouds or wind. There are many small towns and villages in the region that make their living from wine – despite some of the old buildings in town being beyond repair, there is always a nice new bodega, where the wine is made and sold. We tried one of the local reds last night – it actually came free with the meal. It was quite reasonable too, at a rating of a 7 in my opinion. Given that it was free, this effectively gives it a RWVQ score of infinity.

I did a lot of running today on very basic dirt and gravel roads. I find this quite difficult, as the uneveness hurts my heel, and the sharp rocks in the gravel bruise my feet through the thin-soled shoes. I will have to try to avoid such roads as much as possible.

Just about every village I run through has many ancient buildings that are falling down or in total ruin. Many look to be many hundreds of years old. There are often lots of nice new buildings side by side with the dilapidated ones. I guess no-one these days wants to live in a house with no plumbing or sewerage or running water, and it would cost more than it’s worth to retro-fit the really old ones with these modern amenities. So people just move out and leave them (I think this happened a very long time ago in many instances). They probably had minimal value anyway. It makes for a very rustic look, but I wonder how it affects the psyche of the residents, seeing all this rural decay on a daily basis. Anyhow, it makes for pleasant running scenery.