The soreness continued yesterday, so I made the decision to have several easy days of running. The tendon was noticeably better this morning, so a few days of rest should do the trick.

It makes sense to take it easy for a few days as I intend to do a full day of running in the country on Friday, followed by a half day or so on Saturday – specific training for the Anzac Ultra. I’ll be covering plenty of kilometres on those two days.

Kevin Carr is now at the Hotel Portillo, at an elevation of about 3,000 metres in the Andes. Carmel and I stayed there in November 2012 during my run over the Andes. Tomorrow Kevin will crest the Cristo Redentor Pass at nearly 4,000 metres above sea level, securing one of the most spectacular views on Earth, with Aconcagua, the highest mountain in the world outside of the Himalayas, visible in the distance. Below is a photo Carmel took of some amazing hairpins on the road Kevin ran today. If you look hard, you can see me about half way up. 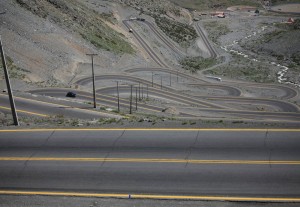 I must admit, the new pair felt great, and I had not problems at all, despite not wearing them in. They are actually an old pair from about two years ago. I didn’t much like them at the time, so didn’t wear them. They feel good now, however.

I hadn’t realised it until I saw the signs, but I found myself running alongside the Camino de Santiago today. I thought it was further north. For those who don’t know, this is a track that religious people walk, culminating in kissing a stone idol in the cathedral in Santiago de Compostela, in the north-west of Spain – a bit like a walker’s version of the Blarney Stone. Not my “cup of tea”, I have to say.

I often get asked how I handle blisters. Simple – I don’t get blisters. Since starting this run nearly 14 months ago, I’ve had no common blisters – just one small blood blister about a year ago, and I didn’t even know about it until I took my shoe off. I have also lost two toenails in the early months of the run (one on a big toe, the other on a smaller toe), and neither of these involved any pain either. The toenails are all back to perfect health now.