For the first time since early last October, I ran a small faster section – 1 km in 4:31. It’s slow by many people’s standards (certainly by my younger standards), but a lot faster than my recent running. The good thing was, it felt very easy. I’ll gradually get faster over the coming weeks and months.

Today’s world run blog posts describe my sojourn down the Californian coast, reaching the town of Carmel. There are two videos from this time. They’re worth a look.

Distance today = 53.97 km; Total distance = 2024.92 km; Location = 12 km west of Santa Cruz – 36 58.714′ N, 122 08.162′ W; Start time = 0934, Finish time = 1658
http://connect.garmin.com/activity/149676552
Another day running south along the Californian coast. Although not what I’d called a quiet back road, the traffic is relatively light, making for enjoyable running.
Early on I passed a hitch-hiker going the other way. He wasn’t having much luck and look quite distressed as he asked me if I knew where the next water availability was – he was “parched as, bro”. I had come from the direction he was heading and I knew there was no water for many Ks, so I made a snap decision and and gave him all my water. I was going to get more in 13 km and knew I’d easily make it that far in the cool conditions (although, as it turned out, it was 18 km before I actually got my next drink). I’m sure he appreciated it far more than me.
Later I passed what I was told was the second highest lighthouse in the US. I would have thought the US had many taller lighthouses. The wind was picking up and was very strong by the time I finished. Luckily it was a tail wind. I saw lots of windsurfers and kite surfers as I made my way along the coast.
I have to say, I’m surprised at how poor the mobile phone reception is in this region. I hope it’s not the same throughout the US. Maybe it’s my carrier (T-Mobile)? I’ve gotten used to having good coverage in Australia, even in quite remote country regions – perhaps I’ve been spoiled.
After being out of range almost all day (which means the GPS real-time tracker does not update), I finally came into range and the girls called to tell me to drop into a berry farm just before the town of Davenport for a hot apple and strawberry cider “to die for”. A few Ks further on and I spied the farm and headed in. The owner (I think) asked me where I was running, and I told him the story. He then kindly offered me the cider for free. It was truly delicious. If any reader is heading north of Santa Cruz, drop in to this berry farm just after the corner of the turn-off to Swanton. I believe the pumpkin curry is also amazing.
I finished the day about 12 km short of Santa Cruz, which is where we’re staying tonight. I didn’t have reception at the finish point, so couldn’t get the tracker to pin-point me at this location. I turned it on in town to give everyone a rough idea of where I am, but be aware that my true “running position” at the moment is about 12 km further west.
Tomorrow I head further south. I estimate that on Thursday I’ll reach the town of Carmel (Clint Eastwood used to be the Mayor of this town). Carmel will obviously be excited to be in Carmel.

Distance today = 50.93 km; Total distance = 2075.85 km; Location = 6 km south of Watsonville – 36 51.058′ N, 121 46.279′ W; Start time = 0853, Finish time = 1645
http://connect.garmin.com/activity/149894747
An absolutely glorious Californian winter’s day – just perfect for running. I passed through the town/city of Santa Cruz early in the day, and spent some time in an interview with the local paper, and on the road with their photographer, John.
Other than that, the day consisted of pleasant, if uneventful, running – other than one small incident. I noted on the map the intersection where the road I was on met the highway. When I reached that point, I discovered my road actually led under the highway. Not to worry – I thought I’d clamber up the embankment and join the highway. I didn’t count on the slope being covered in brambles and small thorns. I now have multiple scratches on my legs.
The pity was that, on reaching the highway, I found myself on a bridge full of speeding traffic, with about six inches between the cars and the concrete wall for me to run. Adventurous as I am, that was too narrow even for me. So, I had to then descend through the brambles again, suffering further scratches. Just one of the myriad minor issues one encounters on a run around the world.
Tomorrow I will report on the much anticipated arrival of Carmel in Carmel.
I’d like to finish with a big thank you to Teachers Health Fund  in Australia, who have very kindly provided our travel insurance for the trip. Very much appreciated. 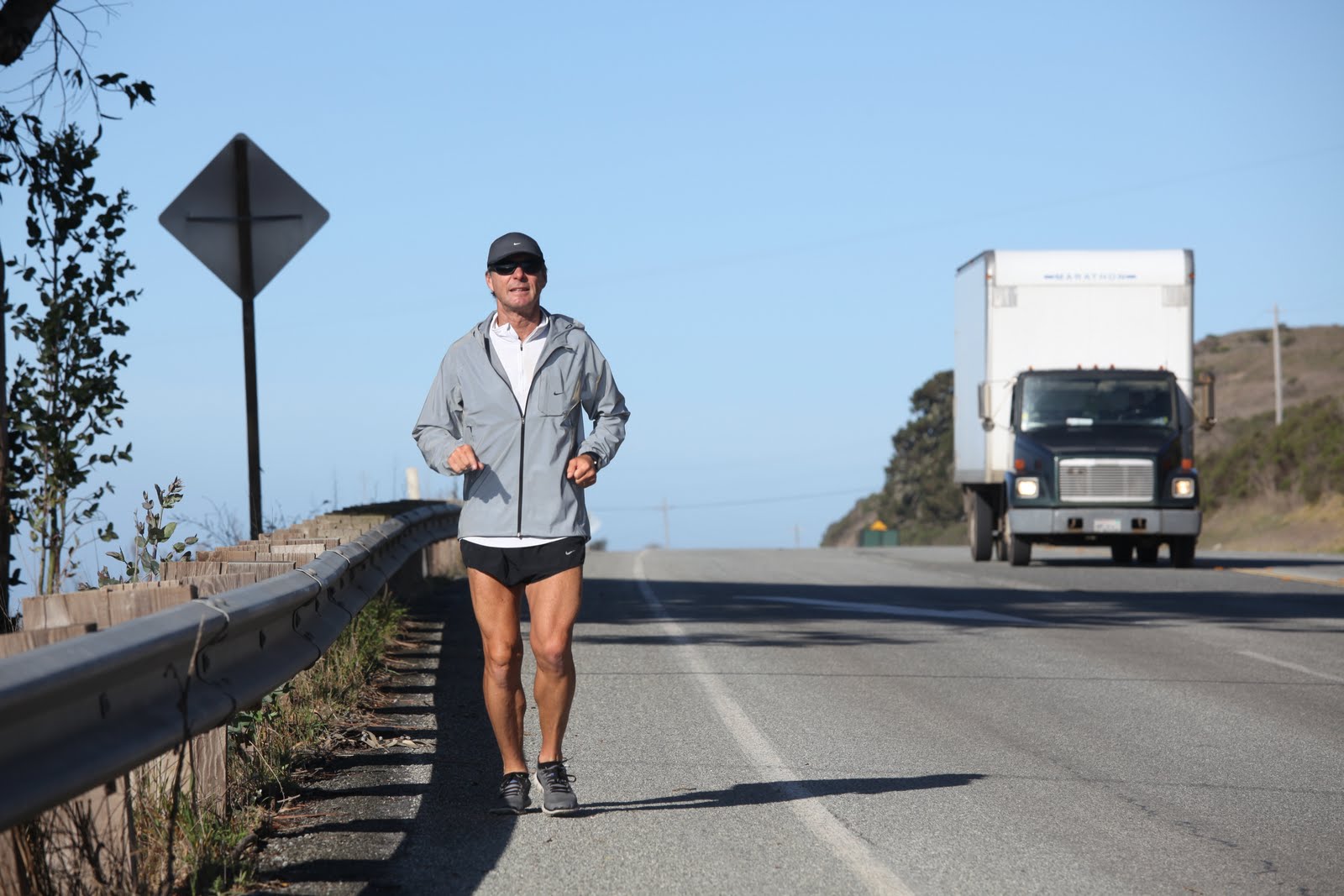 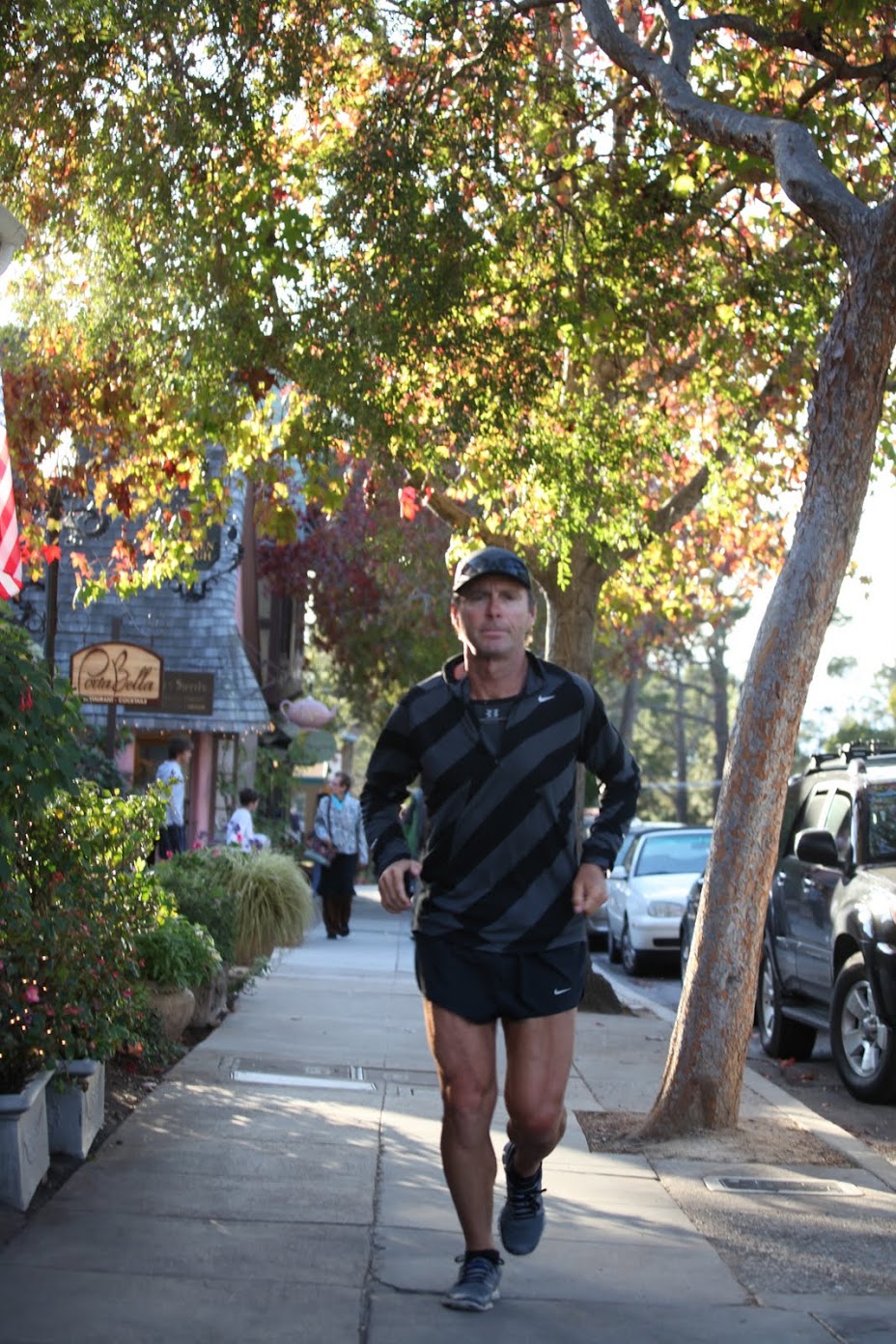