Something different for today – not specifically related to running, but it certainly is an important health and fitness issue.

Those who have read my book will know I’m quite scathing of the well-known physiological measure of Body Mass Index, or BMI. It’s not that I’m against the concept of a BMI in general, just critical of the way it’s defined. It’s almost criminal that the medical fraternity use this metric to advise individuals about their health when the definition of BMI is so fundamentally flawed. This is not a matter of opinion – it’s a basic fact of physics.

So, given this travesty of common sense, I believe it’s our duty to try to correct this almost universal misunderstanding of BMI. But how does one do this? Probably incrementally, at best, and a good place to start is via a groundswell movement that gradually infiltrates its way into the psyche of a much larger audience. So, please forward this on to anyone you feel may be interested, particularly those involved in the medical or health and fitness sector.

But firstly, why is the existing definition of BMI so wrong? It’s to do with the relationship between mass and height. Everyone recognizes that, for people with similar body shapes, a taller person is likely to weigh more than a shorter person. And, of course, for two people of the same height, a more obese person weighs more than a skinny person. How can this bit of common sense be quantified so that it’s of some practical use? A properly defined BMI is the logical way. BMI attempts to define a measure that relates weight to height in such a way that an obese person will return a higher BMI than a skinny person, irrespective of height. From a medical perspective, this can be a worthwhile quantitative measure that might ultimately lead to better health.

The problem is, the current BMI definition completely misunderstands basic physics. The weight to height relationship it purports to represent erroneously compares a person’s weight to the square of their height. This would be fine if we were two-dimensional cardboard cut-outs, but we’re not – we are three-dimensional. A human’s weight is a function of their volume, and volume depends on height, width, and breadth (or thickness).

Consider this somewhat simplistic example, where two people are exactly the same shape – with the same proportion of muscle mass, bone mass, and percentage of fat – except one is twice as tall as the other. These two people would look identical, other than the fact that one would appear to be a miniature version of the other – a Mini Me, if you like.

These two people should, by definition, have identical BMIs. So, let’s actually calculate it. Firstly, assume the first person is one metre tall, and the other is two metres tall. But the taller person, of course, is not only twice as high; they’re also twice as wide and twice as thick (or deep, or whatever you want to call that dimension from front to back). This means the taller person’s volume is 2 x 2 x 2 = 8 times as large. And, because their bodies are internally the identical (same density), this means the taller person will be eight times as heavy. If the one metre tall person weights, say, 20 kg, the two metres tall person will weigh 160 kg.

So, what are their respective BMIs? Remember, they should be the same. But, based on the current (incorrect) formulation for BMI, the smaller person will have a BMI calculated as: 20 divided by 1 squared. This equals 20. The taller person, however, will have a BMI of: 160 divided by 2 squared. This equals 40. In other words, despite having body shapes and internal percentages of fat, muscle, and bone that are identical, the taller person would be considered extremely obese, while the shorter person would be considered very skinny. I hope you can appreciate the absurdity of this situation.

OK, what’s the solution? It’s very simple – formulate BMI according to the proper physics. Just divide weight by the cube of height, instead of the square. In the example above, if we divided 20 by 1 cubed and 160 by 2 cubed, we’d get a BMI of 20 for both individuals. Problem solved.

It may be desirable to recalibrate the ranges that are considered obese/normal/underweight, but that’s just a matter of agreeing these range limits. For example, I’m pretty much considered to be in the normal range – neither fat nor skinny – so what would my BMI values be under each scenario? I currently weigh about 78 kg and I’m 1.79 metres tall. Based on the existing convention, my BMI is calculated to be 78 divided by 1.79 squared. This comes to 24.3, which is in the normal range under the current system (though getting toward the overweight end of the normal range).

But what’s the normal range for a BMI that’s calculated correctly? Well, 78 divided by 1.79 cubed is equal to 13.6. Without having delved into this in detail, I suspect a normal BMI, when calculated properly, should be considered somewhere between about 12 and 15. Above 15 would be entering the overweight range, and over 20 would be obese. A true BMI under 12 is where you start to be considered underweight.

Defined this way, the concept of a BMI would be far more accurate, and could be of much more use to the medical fraternity. So spread the news and, for a change, let’s get a bit of truth, reality, and common sense spreading across the internet.

To finish on a running note, this photo was taken as I passed through the Californian town of Carmel, where we stayed on this day (Feb 18) six years ago. It’s just a few kilometres from both the famous Pebble Beach golf course and the home of Clint Eastwood. 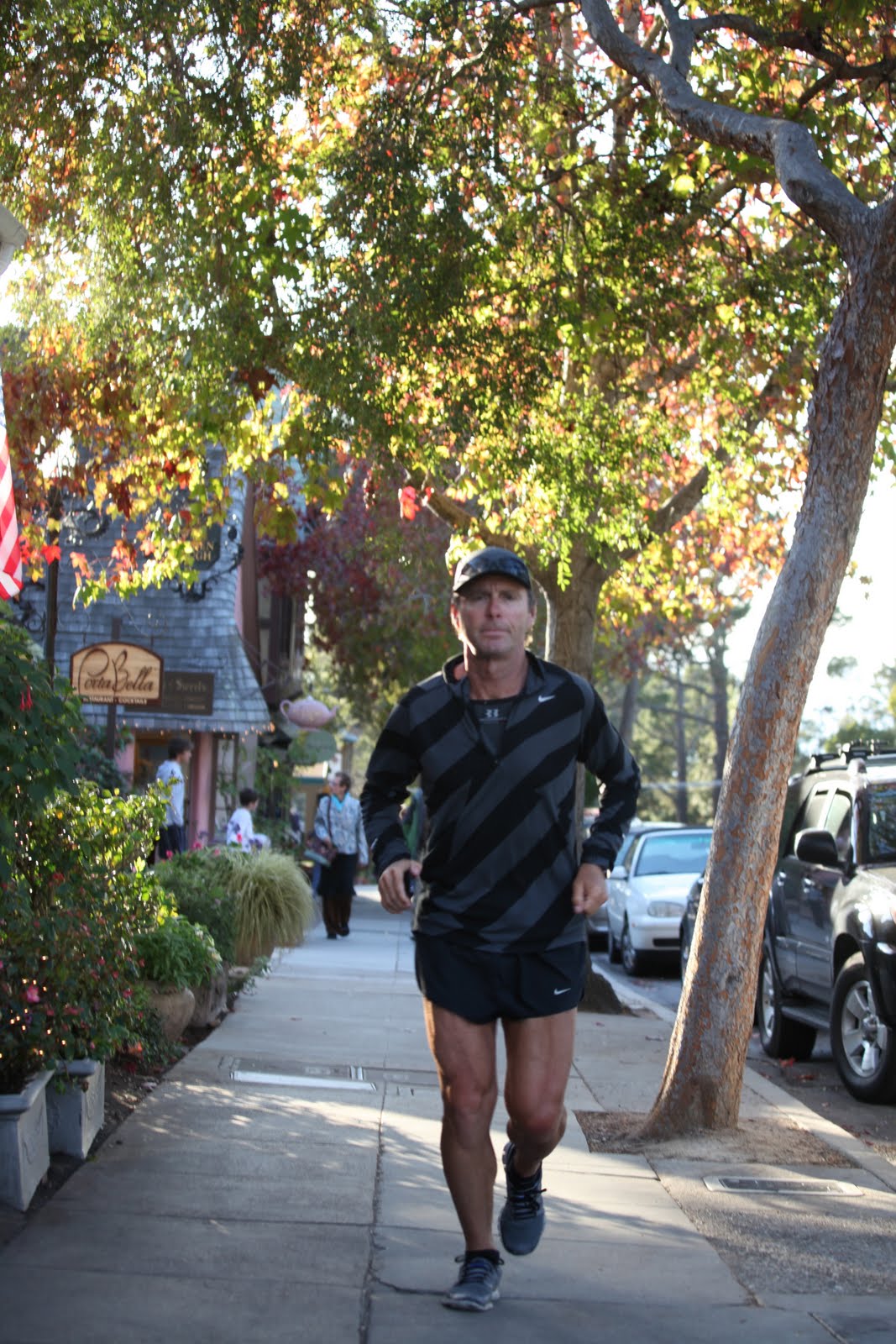