Happy Groundhog Day!!! The reason I mention it is because it holds some significance to me in regard to my run around the world. I passed through Punxsutawney in Pennsylvania just before the halfway mark of the run. Punxsutawney is the origin of Groundhog Day. You can read more about my experience there in The World at my Feet.

I’ve decided to hold off entering the Canberra 50 km Ultra. I just haven’t managed to get motivated enough about it at this stage, but I may still do the race. Not entering now only means I miss out on a $10 early bird discount. To be honest, I don’t have much to achieve at that distance. I have a lot more interest in the six day stage race in the Simpson Desert in late June. It’s just the (nearly) $3,000 entry fee that’s preventing me registering for that one. Whatever I end up doing, it has to feel right. Sometimes you just have to wait until you get that feeling.

Serge Girard has begun his world run in style. He ran 65 km on his first day and appears to have run a similar distance on Day 2. He’s currently in a region of France I cycled in 2007 during a Paris to Rome ride with Dave.

The photo below is of the Colorado River, where I crossed it near the Californian town of Blythe. It was early in my world run, at a time when every day felt fresh and interesting. Soon after I took this photo, however, I was running on an almost non-existent dirt trail which eventually petered out and I had to run briefly on the Christopher Columbus Trans Continental Highway. 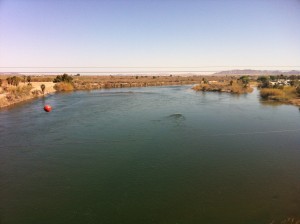 We had a great BBQ last night with members of the Tauranga Boys College cross country team, including some of the parents. It was great to chat and answer questions, and the hospitality was unprecendented. We then stayed the night with Scott and Kirsty, which was greatly appreciated.