I chalked up 520 km during January – my best for that month since the world run. But I have to admit that running back in Sydney has been a lot harder than running down south. This morning I did fartlek session (remember, that’s Swedish for ‘speed play’) that included a kilometre in 4:19. However, the whole run was quite a chore.

The movie Manchester by the Sea  premiers in Australia today. I haven’t seen the movie and have no opinion on it, but it does bring back memories for me. The town the movie is named after and filmed in is a real place in Massachusetts. It’s where I finished my run across North America.

Having started in San Francisco, I concluded that part of my world run eight months later by dipping my toe in the ocean at Manchester, after more than 12,000 km running across the continent. I took a video of the occasion too, but I can’t seem to locate it. So, if you see the movie, or just the trailer, take note of the quaint harbour with the fishing boats in it – that’s where I dipped my toe in the water.

This photo below was taken as I approached the town of Williams in Arizona. Williams is sort of the gateway to the Grand Canyon – the point where you leave Route 66 and head north to the canyon.  It had snowed heavily a couple of days earlier. However, by the time I reached the Grand Canyon, two days later, most of the snow had melted. 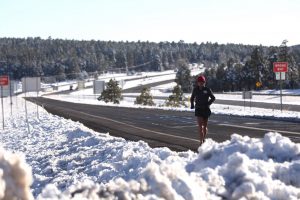 Sorry for  the hiccough with the web site. Hopefully things will be back to normal from now. I published yesterday’s blog but it is only just now visible. Please read it first if you haven’t already.

Following on from the previous installment, we had a great BBQ last night with members of the Tauranga Boys College cross country team, including some of the parents. It was great to chat and answer questions, and the hospitality was unprecendented. We then stayed the night with Scott and Kirsty, which was greatly appreciated.