This year I’ve run at least 100 km in each of the eight weeks so far. That unbroken sequence will likely come to end in two weeks when I taper for the King Island 32 km race. I’m looking forward to the event – my first real race since the Icarus 12 hour race in Florida back in November 2015. This next event is on March 12.

As readers are aware, I never take inducements to promote any products. I have had numerous offers to be paid to write about various things, and have declined in every instance. If there is something I feel is positive for runners, I will simply say so. And there is a product I feel is worth mentioning. I’ve been trialling something called SIS (which stands for Science in Sport) REGO Rapid Recovery. While I’m just a sample size of one and my experience is anecdotal and not rigorously scientific, I do feel I’ve benefited from using this product. I’ve been taking the chocolate flavour. While not quite a chocolate milkshake, it’s more than pleasant. I reckon I have more energy the day after, particularly after a hard effort.

Here’s a classic photo from the Grand Canyon. It was a surreal experience to reach this amazing wonder of the world on foot. If you ever get a chance to visit the Grand Canyon, make sure you do, although I’m sure it won’t be on foot for most people. 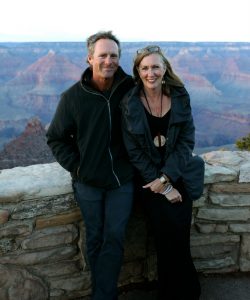 Today was another scheduled short day, with 24.2 km. I’m glad I had planned a half day, as the 2 am finish last night would have made a full day less than preferable. We had a great night at a Mexican restuarant in Santa Barbara, followed by a live band in a nearby bar.

We’re staying a couple of nights with Libby’s nephew, James, and his wife Jacki, along with Harry (and Buster the dog). After today’s run, James drove me back from my finishing point at Carpinteria, and we all went down to the Santa Barbara Marina for a fantastic seafood lunch.

It started snowing in earnest last night, and everything was white this morning. I guess that counts as a white birthday. Thanks to everyone out there who wished me a happy birthday for yesterday.

It made for a very different run, with the lots of flakes gently drifting to the ground, and the tree branches glistening white. I was well rugged up, so I wasn’t feeling cold at all – it was just the right temperature.

I passed another couple of milestones during the day. The minor one was reaching 150 km of accumulated vertical ascent. That’s like running to the top of a mountain that is 150 km high. Or, more realistically (if you can call it that), running from sea level to the top of Mount Everest and back seventeen times.

The more important milestone was crossing the Greenwich Meridian. I am now running in the Eastern Hemisphere for the first time in over a year. It’s nice to know I’m now back in my own half of the world.

It snowed all day – not a single let up – although mostly it was light. However, it got quite a bit heavier by mid-afternoon, which resulted in Carmel losing me. After a protracted effort, she finally located me again, at which point I decided to call it a day. Shorter than planned, but still a good day considering the conditions.

Right near the end, I dropped my Garmin in a fast flowing gutter. It was completely inundated for several seconds. It seemed to go a little haywire for a time, but appears OK now. And the data seems fine too. Phew, that’s a relief.