I ran a total of 125 km last week – certainly my biggest for several months. Admittedly, it wasn’t high quality running in the main, but I don’t want to push too hard just yet. Common sense dictates I need to gradually increase the intensity.

So today I included a very minor speed session; just 2 x 200 metres in 41 and 37 seconds respectively. But it was an improvement on last week’s single 200 metres in 43 secs. After the sprints I actually felt much faster and fresher over the final kilometres of the run.

Here is another photo I took in the Colorado Rockies. Once again, I was on the high plateau, looking up at the many peaks that reach above 14,000 feet in this state. 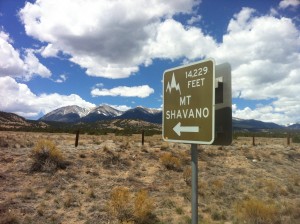 We had a great experience last night, enjoying dinner with our French hosts, Michele and Patrice. They have a great gite, L’Enclos, and we thoroughly relished the traditional French dinner they provided, as well as their company. Despite the language issues, we were still able to communicate pretty effectively, even if some of it involved writing on paper.

It was a quiet but productive day on the road, as I made way east across France. I spent much of the day on roads I cycled with Dave 18 months ago. I even ran past a kebab shop where we had lunch back in 2011. It was quite hilly, but I didn’t really feel troubled at all.

The past two days, Carmel has found street markets in French towns, and hasn’t been able to resist the paella. Consequently, we’ve had paella for lunch on consecutive days. The guy she bought from yesterday was in today’s town market. He must have been pleased to see her, as he gave her a huge serving of delicious paella for free. It even had yabbies in it – well, the French equivalent, at least.

I finished the day just out of the town of Nailloux. My official position is about 3 km to the east of where the tracker is showing me.