I’m still struggling with pain down the outside of my lower right leg. I’ve decided to take it very easy till next week. My lack of patience and insistence on running through such problems is a real issue I need to conquer. Many people use any excuse not to run. I, on the other hand, find any excuse to justify running, even when I know it’s the wrong thing to do. I think I’m getting better though.

Despite a reduction in my running, I’ve already dropped 3 kg of the 6 kg I put on over the Christmas and New year break. Half way there already in a week and a half. It will take me a little longer than that to drop the other half – hopefully by the end of February. I’ll keep you informed of my progress.

The photo below is of the Grand Canyon from within, taken from a helicopter. Carmel and I took this ride prior to me starting my run along the rim of the canyon that day. The rim you can see in this photo is where I was running a couple of hours later. 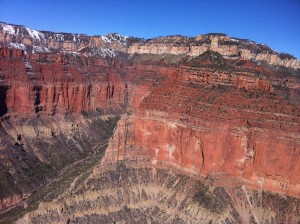 I’d like to end today’s blog with a massive thank you to Roger “Chook” Evans. Not only did he arrange for the Hamilton Road Runners to come and run with me, both yesterday and this morning, he also arranged last night’s function, as well as our accommodation for the evening. Not to mention that he has provided the support vehicle for the entire NZ leg, and will be doing the same (in partnership with his brother Don) for the entire North American leg. Can you get a better friend than that? There simply aren’t enough superlatives to describe Chook, so I will just say a big THANK YOU once again.

The weather has been kind to me this past week. Crisp, still mornings, and pleasantly warm afternoons. Today was more of the same.

I set out fairly early, at 9 am. This may not sound that early, but considering it doesn’t get light in Spain during winter until 8 am, I feel I’m doing OK.

I ran by a nuclear power plant, and on through the large town of Navalmoral. It was then that the service road, which parallels the freeway, turned to gravel. It was a pretty good road, but my feet didn’t appreciate the surface for the next 30 km. I have a few stone bruises on my left foot, due to the thin-soled shoes I wear.

All afternoon I had a great view on my left side. There were snow-capped mountains in the background, and green fields peppered with yellow wild flowers in the foreground. The crystal clear day made it all the more vivid.

I finished in the hill-top village of Oropesa. As I ran into town, I saw an old man calling his herd of about forty sheep in for the day, without the use of a sheep dog – and they obeyed him. Now there’s a good shepherd.

We are staying in a fantastic castle, with a huge room that has an amazing view out over the valley and up to the mountains. I have just witnessed the sunset from the balcony as I was downloading my data for the day. You must check out the photos of the place.

Just as I was ascending the hill to the castle, I passed the 16,000 km mark for the journey so far. What a great way to celebrate my arrival at our castle accommodation. I think it calls for a nice bottle of red!!!