Two videos and four blog posts today from my time in Spain in early February of 2013. I think you should enjoy the photos as well.

Lootie has passed over the Cristo Redentor, the high pass in the Andes, at nearly 4000 metres, where I almost came to grief back in Nov 2012. She was more sensible and attempted it when the snows had melted, having no problems. I envy the journey she now has to Mendoza, the world capital of Malbec. You can follow Lootie’s journey on lootie-run.com/blog.

Another pleasant day of running in western Spain, although there were some minor “off-field” dramas.

Firstly, our Portuguese SIMs don’t work anymore, and we haven’t been in a big enough town in Spain yet to buy Spanish SIMs. That means we’re without a means to be in contact, and I’m without maps. It was only twenty years or so ago, before mobile phones, that we all managed to plan our days and travel around, without the now ubiquitous mobiles. These days, if you’re going to a bar or the football or any number of places, we simply say “I’ll give you a call when I get nearby, and we’ll find each other”. Twenty years ago that was impossible. You had to have everything about your rendezvous planned meticulously. Mobiles have made things more convenient, but we’ve all lost a skill. And that got rammed home to me today.

So, it was back to the days of carefully agreeing on what we’d do and where we’d meet. In the end, it worked out OK. However, for the same reason, the tracker wasn’t able to work today. I hope to have a new SIM by tomorrow, and have the tracker up and running again. In the meantime, I’ve used the hotel wifi for the tracker to locate my end-of-day position.

Secondly, early in the day, when I was leaving the hotel room, I ran into a steel stairwell and split my head open. It’s not quite bad enough for stitches, but will probably result in a scar on my forehead.

The roads were a bit busier today, but still nothing to be concerned about. I would be happy to run on similar roads for the remainder of the journey. Lots of yellow fields that look like canola, but I’m not sure if it is – perhaps it’s just a yellow weed.

Tonight we’re in the large town of Caceres. It was founded by the Romans, and has existed ever since. From what I can gather, there’s also some Moorish influence in the architecture. Hopefully there’ll be some good photos tomorrow.

At 56.6 km, it was my longest day since September 19 last year. It was also the most hilly since the Andes.

I felt very good for some reason, so decided to run all the way to the hotel tonight – a hotel that is only a few hundred metres from a nuclear power plant. I hope there are no employees like Homer Simpson working at this one.

Once again, I ran the whole day on a former highway that has been superseded by a newer freeway. I doubt I was passed by more than ten cars all day. The road passed over a mountain ridge, resulting in a big climb and an even bigger descent.

I often see the remnants of former roads. As mentioned, I’ve been on the second tier road, which was probably built around 50 or 60 years ago. The freeway is less than 20 years old. However, I regularly see an older road – probably the first car-specific road, which I estimate to have been built about 100 years ago. And sometimes the original horse and cart roads are visible too, which are hundreds of years old. These are most evident on river and creek crossings. Today I passed a group of four bridges over the same river, one on each of these roads – the freeway, the former highway, the original car road, and the original horse and cart road. It’s history come alive!!!

Speaking of history, today is “the day the music died”. Who will be the first to provide the answer to this barely concealed music trivia question?

The weather has been kind to me this past week. Crisp, still mornings, and pleasantly warm afternoons. Today was more of the same.

I set out fairly early, at 9 am. This may not sound that early, but considering it doesn’t get light in Spain during winter until 8 am, I feel I’m doing OK.

I ran by the nuclear power plant, and on through the large town of Navalmoral. It was then that the service road, which parallels the freeway, turned to gravel. It was a pretty good road, but my feet didn’t appreciate the surface for the next 30 km. I have a few stone bruises on my left foot, due to the thin-soled shoes I wear.

All afternoon I had a great view on my left side. There were snow-capped mountains in the background, and green fields peppered with yellow wild flowers in the foreground. The crystal clear day made it all the more vivid.

I finished in the hill-top village of Oropesa. As I ran into town, I saw an old man calling his herd of about forty sheep in for the day, without the use of a sheep dog – and they obeyed him. Now there’s a good shepherd.

We are staying in a fantastic castle, with a huge room that has an amazing view out over the valley and up to the mountains. I have just witnessed the sunset from the balcony as I was downloading my data for the day. You must check out the photos of the place.

Just as I was ascending the hill to the castle, I passed the 16,000 km mark for the journey so far. What a great way to celebrate my arrival at our castle accommodation. I think it calls for a nice bottle of red!!! 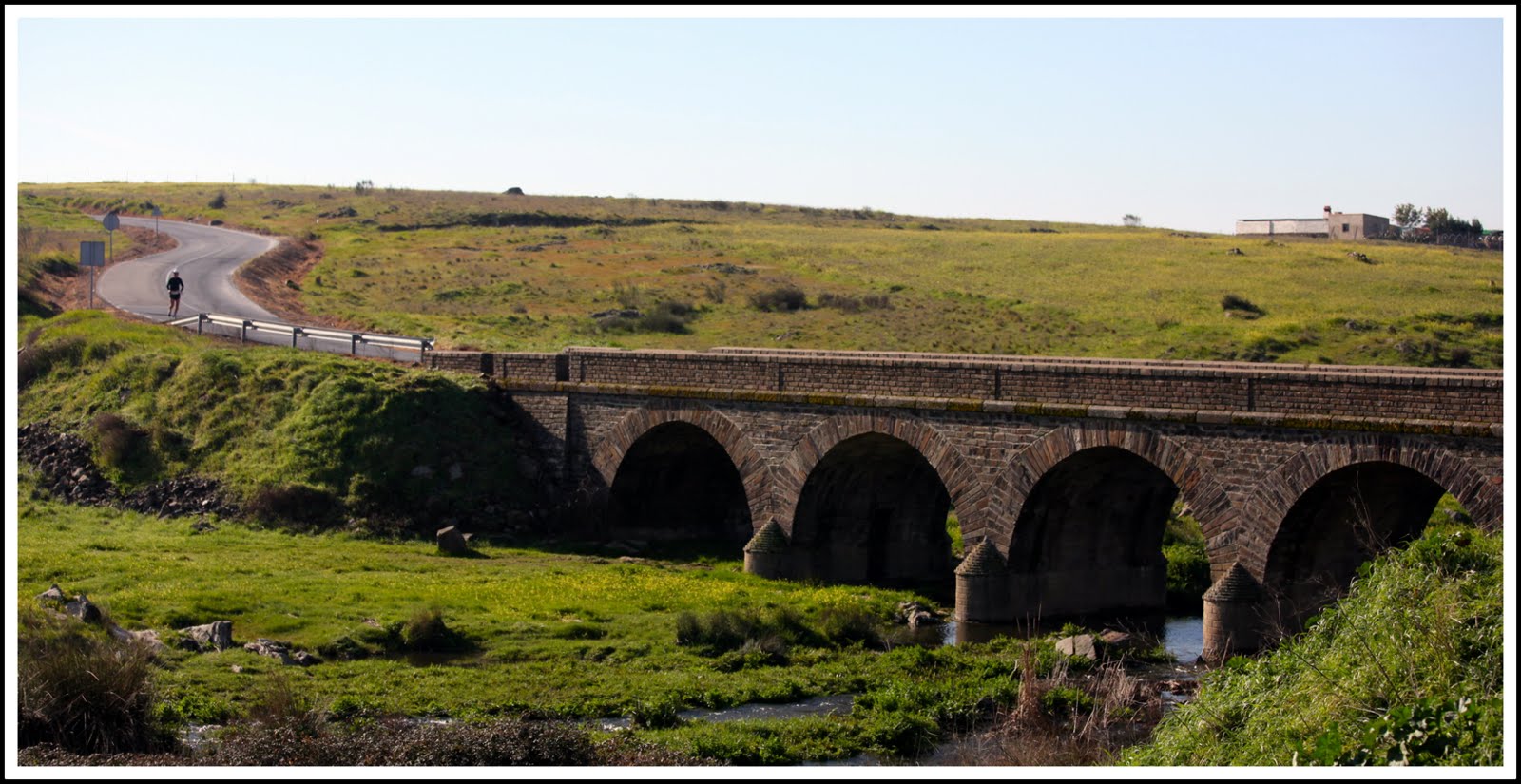 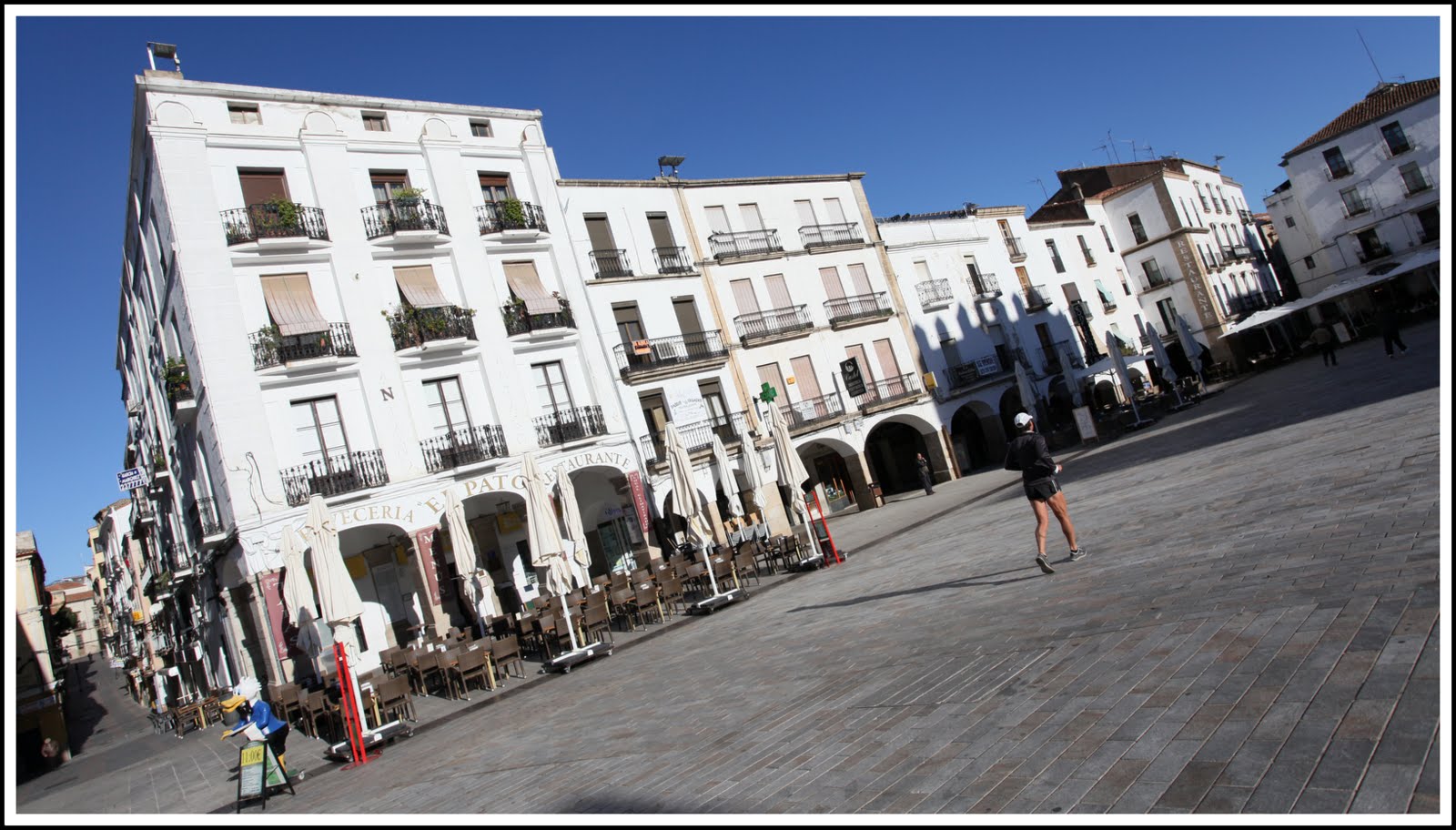 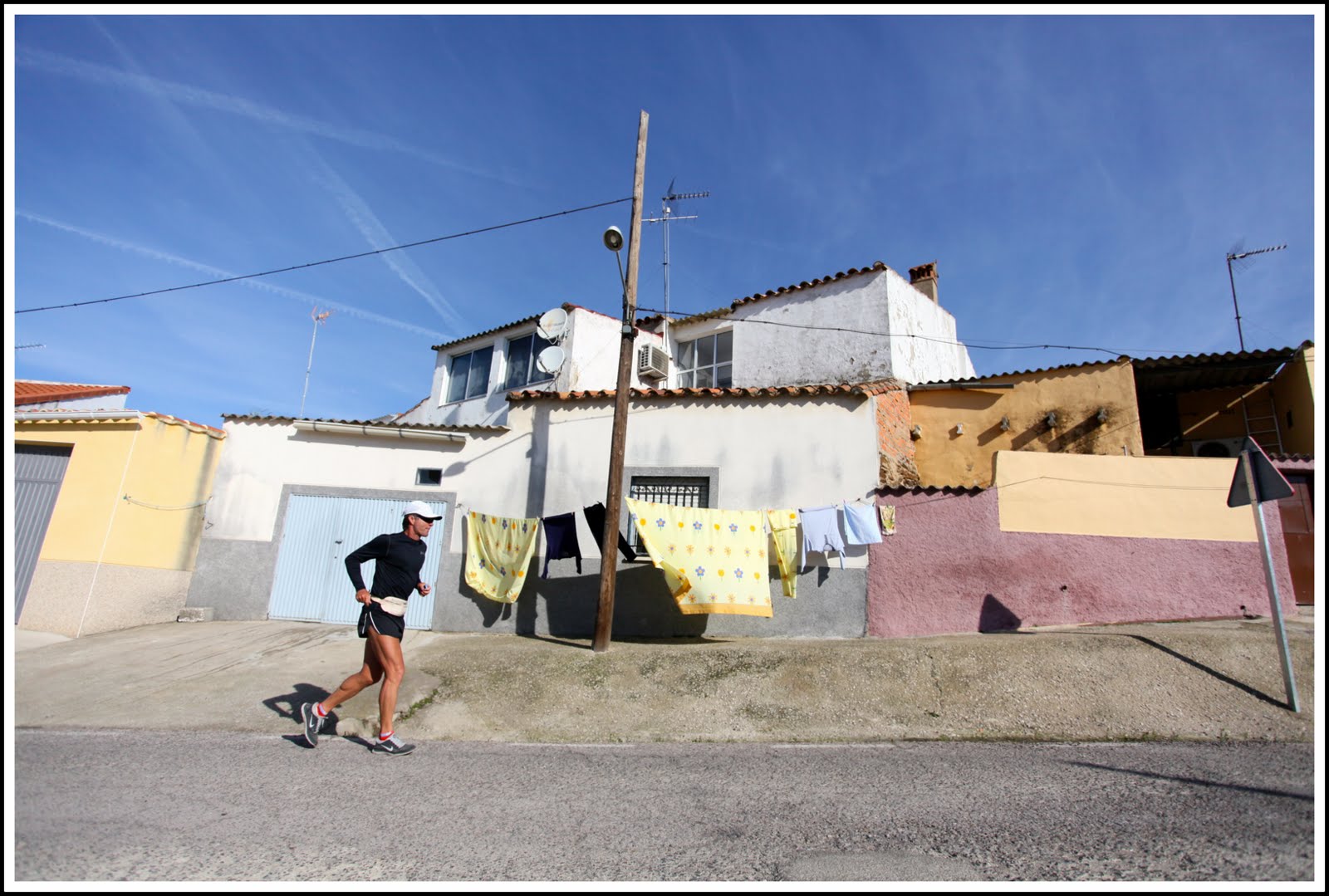 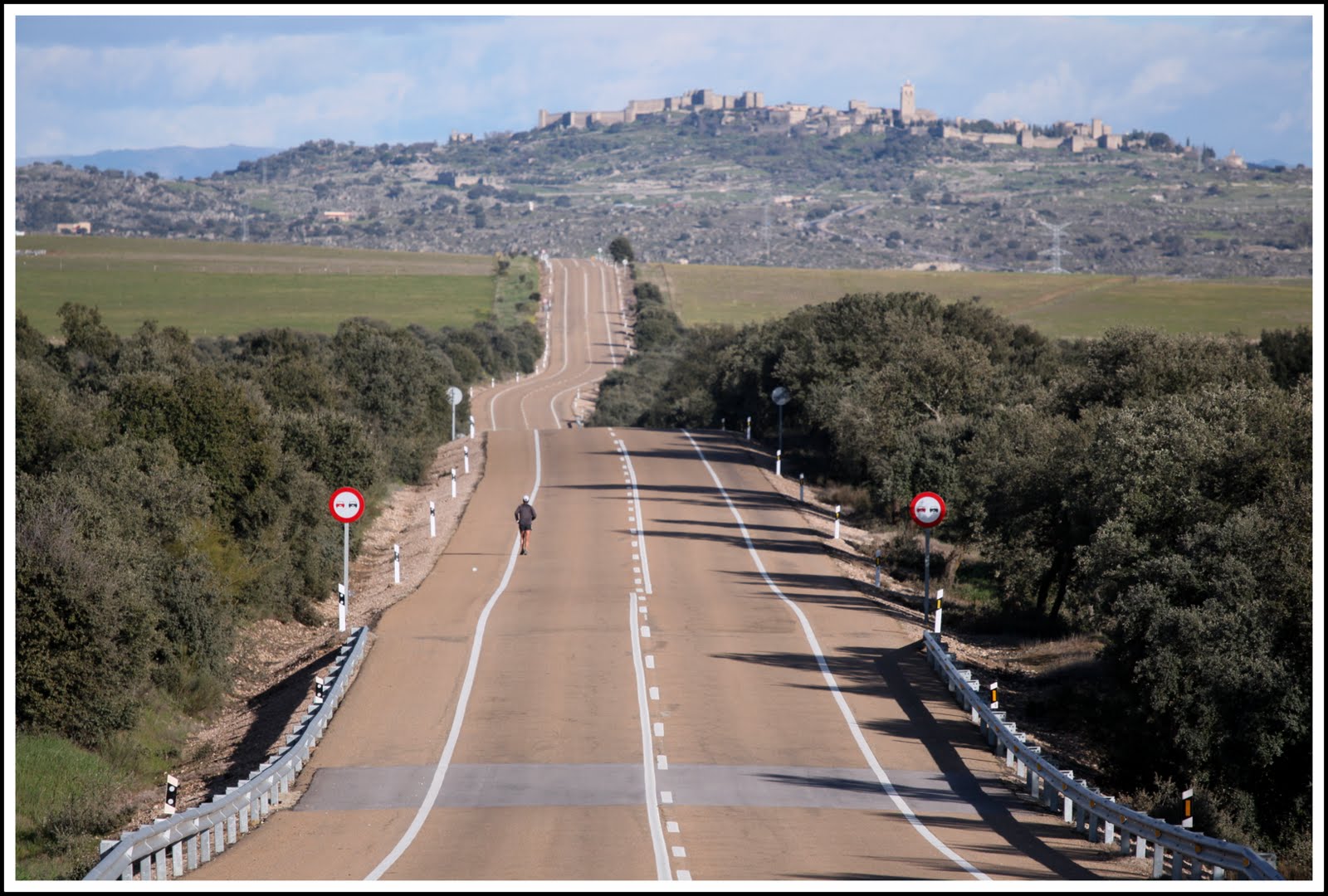 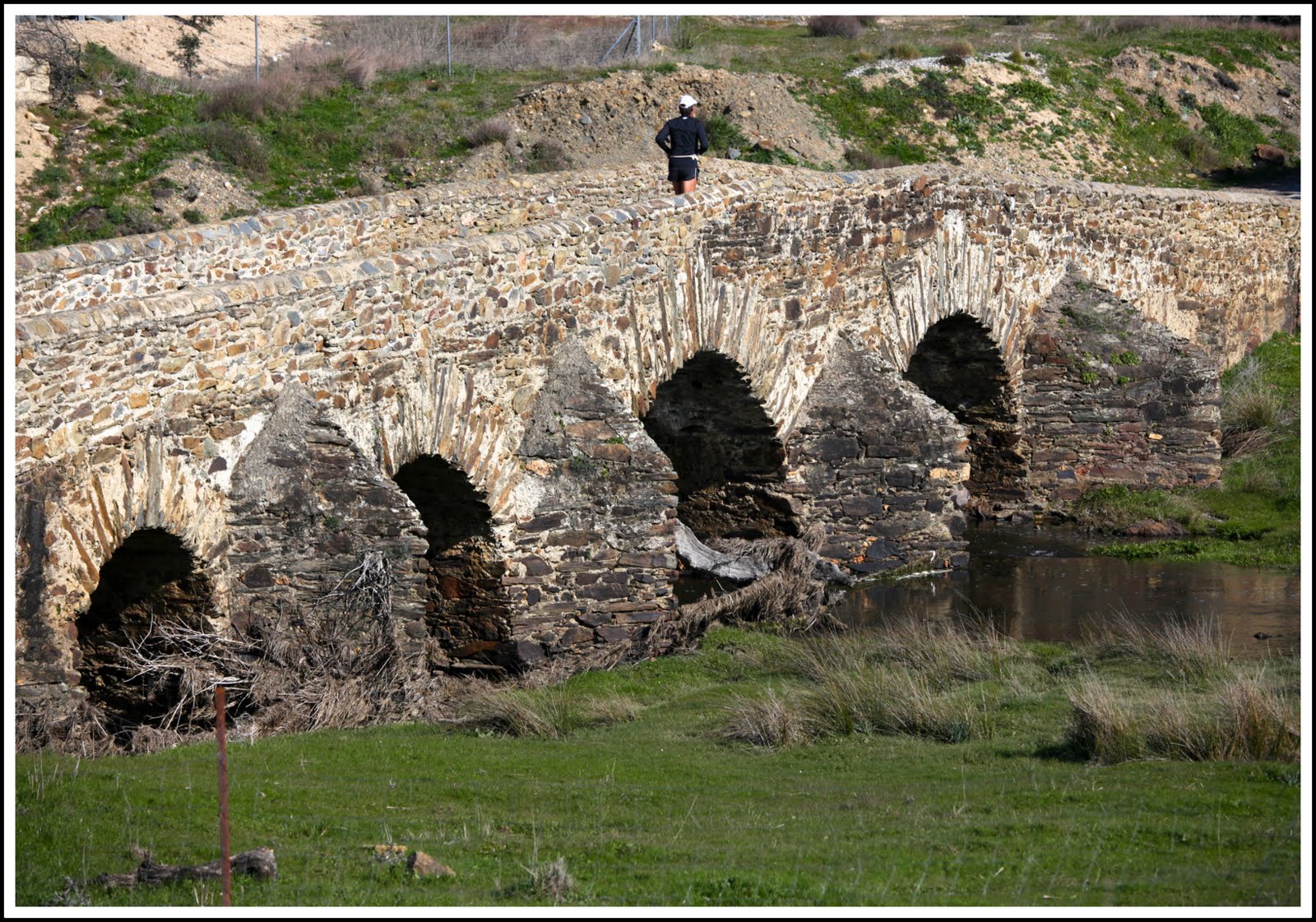 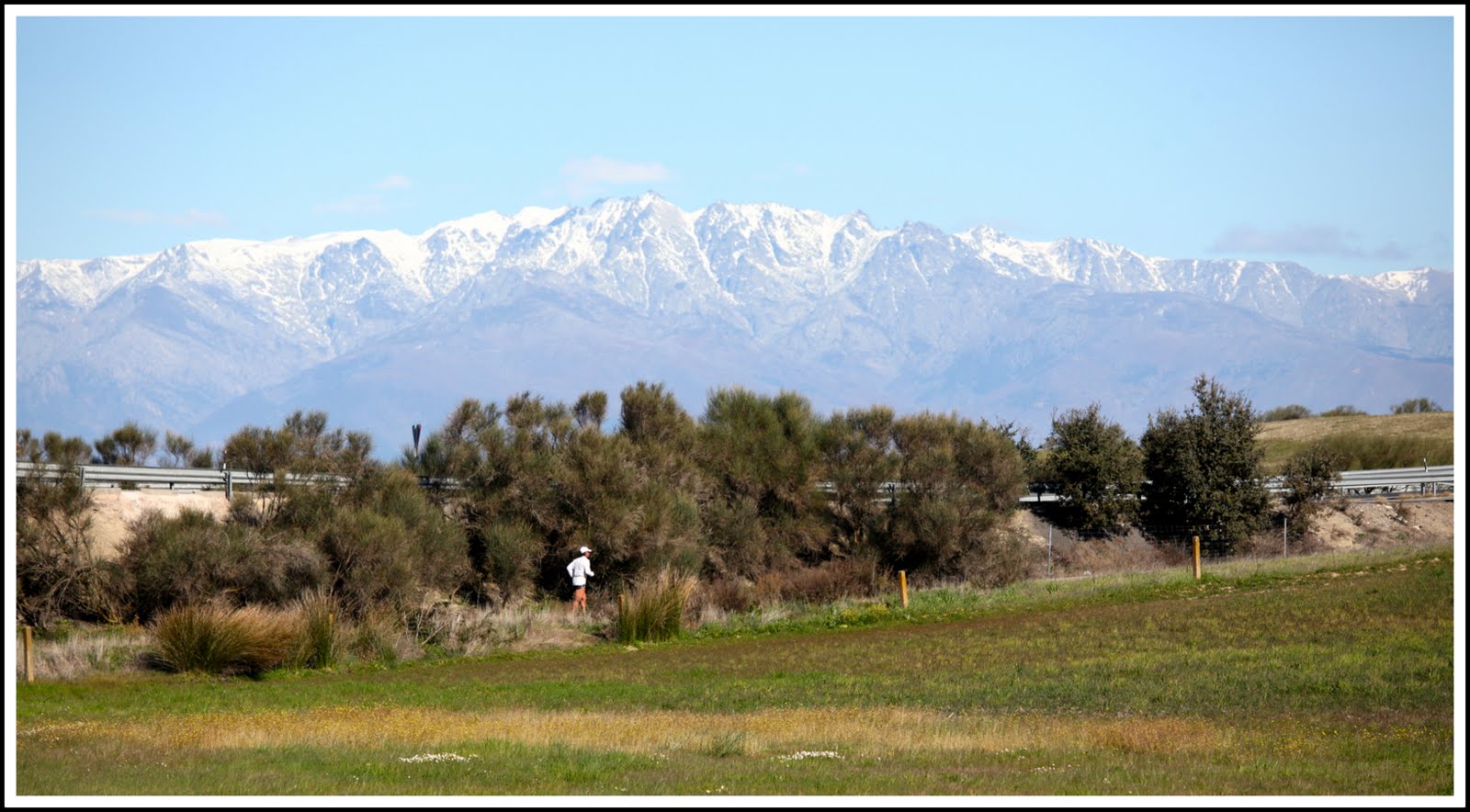