Serge Girard continues to set a cracking pace on his world run, now having covered more than 400 km in just six days. He’s doing quite a bit of running in the dark too. It will be interesting to see, later in the year, how he’s coping mentally with such long days.

I was very interested to see various TV news articles in the past day, in which scientists are now claiming the Body Mass Index (BMI) is crap. For those who have read my book, you’ll know that I’ve been making that same claim for years. Below is an excerpt from The World At My Feet where I explain my reasoning.

This prompted me to consider a topic I find particularly annoying—the body mass index, or BMI. As light as I was at that time (during my world run), I would barely have made the acceptable range according to BMI. In fact, I may still have been touching on the overweight category.

The reason is the BMI formula is fundamentally flawed in its logic. I don’t know who the incompetent individual was that came up with the idea, but it’s a classic case of a worthy technical concept being tainted by ineptitude—in this case, whoever defined BMI had NFI.

Dividing weight by the square of height would be fine if humans were two-dimensional creatures, but we’re not cardboard cut-outs; we’re three-dimensional. A correct definition of BMI would acknowledge weight as being proportional to the cube of our height, not the square.

Instead, we have health practitioners espousing this false notion of BMI, where a very short yet plump person will register a BMI result that’s lower than a tall skinny person. There must be many tall people out there despairing at their inability to reach a mid-range BMI.

Hopefully, the fallacy of the BMI will one day be generally recognised and subsequently corrected.

It looks like the fallacy of BMI is now finally being recognised. If any health practitioner tries to argue in favour of BMI to you, just look them in the eye and tell them they’re an idiot.

Here’s another photo I took while running through the Arizona desert. It might look like a mentally difficult place to run, but it wasn’t. I found it incredibly enjoyable. 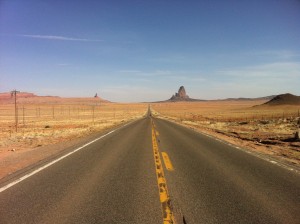 As mentioned, I will be taking a few days off before beginning again in San Francisco, but will be posting reports during the interim, so stay tuned.

Another day of perfect weather for running, with sunny skies and a wind at my back all the way. It was quite hilly, and the downhills took a toll on my legs late in the day.

Carmel had to help a local at about the 30 km mark. While she was stopped, a woman asked her if she’d drive to her to a petrol station down the road, as her car was empty. Carmel willingly obliged. At the end of the episode, we had a quick photo session with Myriam and her jerry can of petrol.

We had a very nice stay last night at the Posada la Reja in the town of Malpica da Tajo. The place is run by another lovely Myriam. The food is fantastic, and you couldn’t get a friendlier place to stay.

I concluded the day in Toledo. This is one of Spain’s special gems. Once one of the country’s most important cities, it is now famous as the former home of the artist El Greco, and Lladro fine porcelain. The place is still so original, with walls intact right around the town, and buildings as they’ve looked for hundreds of years. It is an absolute must for any tourist to Spain.