Today’s running article is about ultra marathons. As I point out, these hurt a lot less than most might think. The blog posts are from Jan 9 and 10, 2012, as I made my way north towards Christchurch. There’s also a photo from when I was running with Andrew Sloan. Andrew proved to be a great help throughout the world run with various IT issues.

I will be having the MRI on my left foot on Tuesday morning. I’m actually looking forward to it, as I should learn what the issue is. It’s slowly getting more painful over time, which means it’s time to find out the cause.

Should I try an ultra?

Ultra marathon races tend to be dominated by an older crowd. Yes, there are some younger ultra runners, but the proportion of youth in ultras is less than that in shorter races. The reason is simple – young runners tend to be more fascinated with speed. And speed is not something one associates with ultra marathons.

However, the average runner tends to lose their preoccupation with speed as they mature, looking instead to other ways in which to challenge themselves. This is, of course, partly forced upon us all. We all get slower with age. However, we don’t seem to lose our endurance. On the contrary, within limits, our stamina seems even to increase with the years.

This persistence of our endurance, even as we observe the demise of our speed, leads many long term runners to a logical decision. Why not take advantage of the phenomenon? After all, in a relative sense, this should result in a greater competitiveness at longer distances. That, coupled with the normal inquisitiveness for a new challenge, leads many runners to gravitate toward ultras as they get older.

An ultra is technically defined as any race greater in distance than a standard marathon. In practice, ultras begin at the 50 km distance. Other common ultra distances are 50 miles, 100 km, 100 miles – and the less common 1,000 km and 1,000 miles. And then there are the time based ultras – 12 hours, 24 hours, 48 hours, and 6 days. Not to be outdone, classics such as the 246 km long Spartathlon in Greece, and the 89 km Comrades Marathon in South Africa, attract loyal followings.

So, should a runner attempt an ultra? Many are hesitant. The usual attitude is “I know how much a marathon hurts, so I can only imagine the pain involved in an ultra”. But this is not the case. Personally, I’ve never experienced an ultra that hurt as much as my most painful marathon. And the reason is speed.

The majority of runners who attempt a marathon have an ambitious time in mind. This often causes them to run too fast. The outcome is a lot of pain and bad memories. Most of us harbour such memories from one or more marathons in our younger days.

Perhaps it’s for this reason that runners attempting ultras tend to be much more realistic about their time expectations, running conservatively and maintaining a more even pace throughout. And when you do approach an ultra this way, it doesn’t need to hurt at all.

In fact – and this was a great surprise to me when I first ventured in to distances greater than 42.2 km – running ultra distances at a slow pace is actually quite easy. If you slow it down enough, virtually any distance is achievable, and with a bare minimum of pain. If you do discover that sustainable pace, there’s no reason why even a serious ultra distance, like 100 km or more, should be a negative experience.

Lots of long slow running in training is the way to approach your first ultra. And if you do fancy a new challenge and decide to take the plunge, make sure you employ enough discipline and start slowly. You can always up the pace in the final 25% of the race if you’re still feeling good. You might be surprised at how easy and enjoyable such an event can be.

And once you get used to standard ultras, you might then feel up to the ultimate ultra challenge – a multi-day journey run, across a state, country, a continent, or – dare I say it – even around the world.

Another day at the office, and if only the whole world could have this sort of office experience on a daily basis. Superb scenery and running conditions. I’m being spoiled, and I’m sure it won’t always be this good throughout the run around the world. I’m going to enjoy it while I can.

The only negative was that I missed a turn in town when I arrived and ran 440 metres which I can’t count in my mileage distance. I have subtracted the 220 metres the Garmin logged before I realised my mistake and turned off the watch. Oh well, it could have been a lot worse. I’m sure I will make many more mistakes and have to discount a lot more distance than that somewhere along the way in this adventure.

That’s the nature of this sort of run. Too many people have cheated in the past when doing ultra runs of this magnitude. It’s my intention to be as squeaky clean as is humanly and technologically possible, and will be only counting distance that qualifies strictly under the rules. I’d rather miss out on a few hundred metres here or a few kilometres there, than know in myself that I counted distance that I shouldn’t have.

A big thank you to the Pen-y-Bryn Lodge in Oamaru for putting us up tonight. It’s a magnificent establishment, and I’d recommend anyone travelling in the region to stay here. Check it out on www.penybryn.co.nz.

I’ve now reached the Canterbury Plains, and the run was much flatter because of it. This was one of the reasons I had such a long day, although I don’t want to be doing 60 km every day.

I actually ran most of the day on back roads that paralleled the main road, with a lot of it on dirt. These roads were very, very quiet, almost to the point of being lonely. But I’d much prefer that to running on a busy highway.

I did have one dramatic  moment though. Google maps indicated a through-road, but I suddenly reached a “Road Ends” sign. It became clear that a road used to go over a small river, but it no longer did. I had two options – go back 4 km, in which case I would have run 8 km that I couldn’t count in my total, or wade across the small rapids. I chose the latter, and videoed it. The video should be uploaded soon, if it isn’t already.

We are staying tonight at another magnificent house in the countryside, courtesy of a lovely couple, Anne and Paul, and their daughter Bridgette. We are truly being spoilt by the amazing generosity we’re encountering on a daily basis. But we’re not complaining! 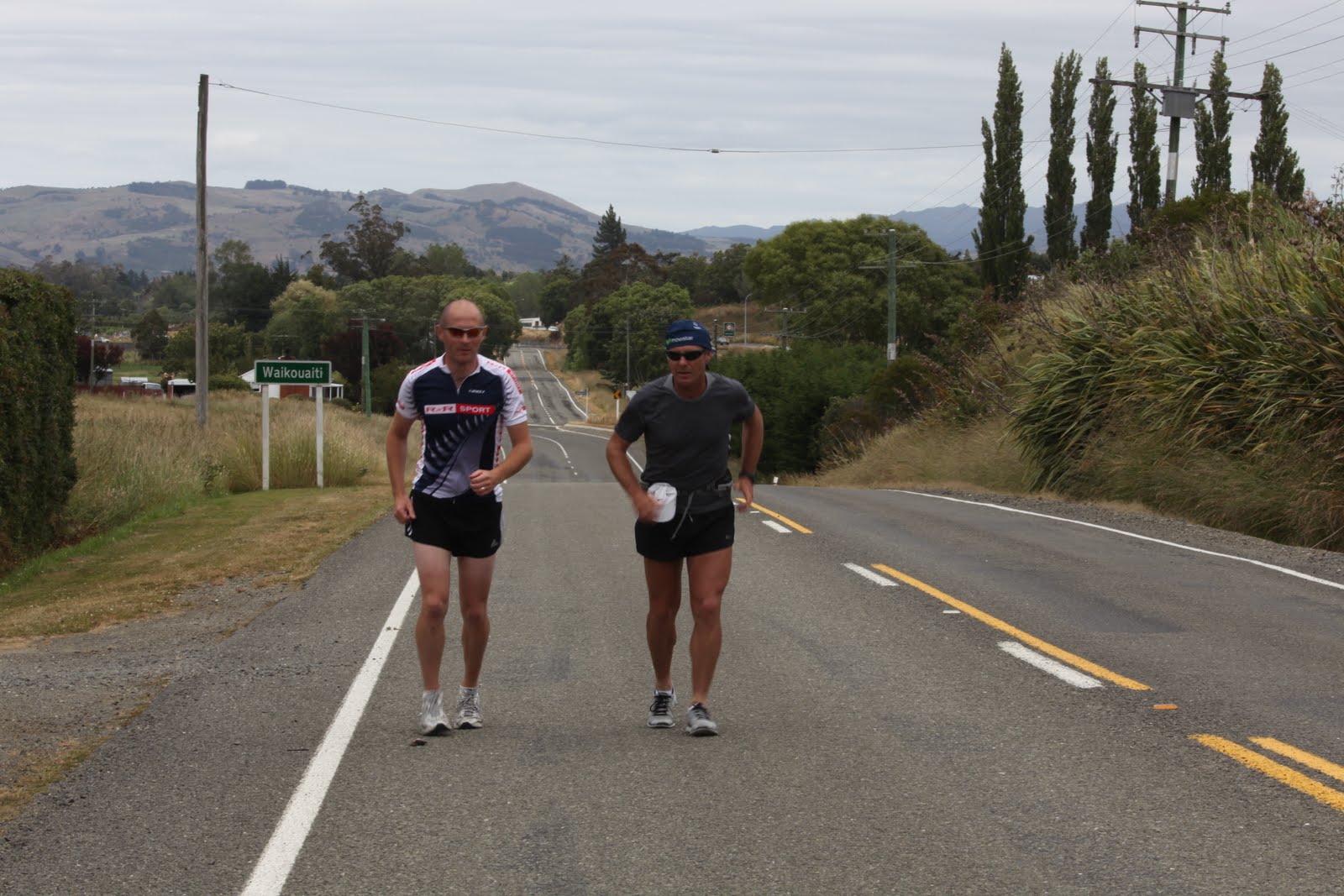