I watched the movie Nomadland last weekend. I acknowledge that it won’t be to everyone’s taste, but I wanted to see it because I could tell from the trailer that it was likely to feature scenes of the US countryside that I had run through.

And it did. In fact, one of the main locations in the movie was Quartzite in Arizona, which I recall vividly. In fact, the movie included a scene in a restaurant bar in which I could even see the exact table where we sat to have dinner the night we were there. And there were other locations – the Badlands and the town of Wall were also heavily featured. I even noted another table that looked like where I had lunch in the eclectic store known as Wall Drug. And to top it off, the Big Sur stretch of coastline was also in there too. So I quite enjoyed the movie.

Today’s running article below is very relevant to world running, and my Jan 13/14 blogs from 2012 are below that.

Journey Running – is it a fad?

As a popular sport, distance running has only been around for a little over forty years. Until Frank Shorter won the Olympic Marathon title at Munich in 1972, there simply weren’t many non-professional joggers. But, within a decade, the number of recreational runners had increased exponentially.

And it has pretty much stayed that way ever since, though the percentage of the population describing themselves as runners has somewhat stabilised over the ensuing three or four decades. However, as is often the case in life, just when things seem to have settled down, an alternative will appear from left field.

The latest innovation in the sport of distance running (besides positive advances like Park Runs) has been the concept of the journey run. A journey run is a multi-day running odyssey, usually from one significant place to another. For example, one might run across a county, a state, a country, a continent, or even around the world. Or maybe just between two cities. The important thing is that the run is a journey from somewhere to somewhere else.

The reality is, journey running is quite rare compared to traditional running. But it is becoming more popular. The cycling version is actually very popular, even to the extent that one can participate in journey cycling via organised tours. Multi-day walking tours are also gaining in popularity. For example, week long walks across Britain or even longer walks along the extent of the Pyrenees appear to be attracting a lot of interest.

While the running version doesn’t see the same number of protagonists, it is on the increase. Those participating are usually on their own, not as part of an organised race or event. Their motivation is simple – to experience the countryside from the ground up, seeing, hearing, smelling, and touching the real world, and all as part of an activity they love doing anyway – running.

City to city journey runs taking two or three weeks, such as Melbourne to Sydney or San Francisco to Los Angeles are not uncommon. Longer challenges are increasing in frequency too, such as Italy from north to south, or the even more extreme length of South America.

The ‘granddaddy’ of all journey runs, however, is the world run. Running around the world is now an established sport in itself, with its own governing body, the World Runners Association (WRA). The WRA monitors the efforts of those attempting to run around the world according to its official rules and guidelines. These include starting and finishing at the same place, crossing at least four continents contiguously from one major ocean to another, running a total of at least 26,232 km (16,300 miles), and passing through antipodal points (points opposite each other on the Earth’s surface).

Until 2005, no runner had completed a fully transparent and documented run around the world according to the criteria of the WRA. At the time of writing, however, that number has swelled from zero to six, with a seventh world run currently in progress. Clearly, extreme journey running is gaining in both acceptance and popularity.

Whether it’s something as monumental as running around the world, or a more achievable city to city challenge, increasing numbers of journey runners are taking to the roads of the world to participate in their sport as part of a more comprehensive life experience. If you’ve ever considered such an odyssey, try it – there are few things as enjoyable as being on the road each day as you make your way inexorably toward your destination.

A solid 52.5 km today, with a very windy afternoon. Remember to click on the link above to have a look at where I ran.

I stopped in Ashburton after 17 km to do a local media interview. We then got talking with the ladies in the information office, had something to eat and, before you know it, it was 12:30 pm by the time I left. It made for a long afternoon, almost entirely on back roads, but I’m not complaining.

I actually felt very good today. I reckon it was the great steak and vegetable meal that Libby cooked last night, washed down with a nice shiraz.

We have struck gold again tonight, staying at the lovely St Ita’s B&B in Rakaia. A big thank you to Miriam and Ken for putting us up for the night. The place is magnificent.

Tomorrow I head off to Christchurch, which I should reach in a single day. We’re hoping the tremors stay away for our visit. Fingers crossed.

My biggest day yet – 62.8 km – but I was helped quite a bit by a strong tailwind for most of the day. If you are going to cop a windy day, that’s the direction you want it. Once again, click on the link above to see all the details of the day. Click the Change to Metric button on the top right, and also scroll back through past days by clicking on Previous.

Soon after leaving Rakaia I had to cross the Rakaia River, which is NZ’s widest at 2 km. However, the road bridge has essentially no place for pedestrians to cross. You need to make yourself very thin against the railing as cars pass, and it becomes a nightmare when a massive truck comes by. However, Ken (from last night’s guesthouse) told me there was pedestrian access on the rail bridge. I was a bit tentative about crossing a 2 km long bridge on a railway line. However, Ken’s advice was accurate, as there was a nice walking path alongside the rail track. Thanks Ken. It saved me a lot of angst.

Early in the afternoon I was joined unexpectedly by Chris from Rolleston. He had been watching my progress on the GPS Tracker, noted I was getting close to his place, and decided to come out and have a run with me. This was great for two reasons.

Obviously it is positive to have people come along and run with me, and the tracker is a great way for such people to locate me. The other reason is more subtle, and something I have been advocating for a while. You see, when anyone can turn up to see a runner at a precise location, according to where their tracker is placing them, there is a very heavy onus on the runner to “obey all the rules”. In the sport of multi-stage ultra running, it  is, unfortunately, not that unheard of for runners to cheat by claiming they ran certain distances when, in fact, they did not. There was a recent case of this, so I’m told, in regard to a run around Australia. When anyone can turn up to “surprise” the runner, it makes it a lot harder for cheats to prosper. Anyhow, having Chris surprise me today on the road validated my belief that real time GPS trackers have a large role to play in this sport.

I had to race a bit to get into Christchurch before the battery in my Garmin GPS (not to be confused with the GPS tracker, which is i-Phone based) ran out. It’s a bit disappointing that such an expensive toy only has a battery life of 8 hours. A 60 km day with stops and breaks can easily add up to 8 hours on the road.

I finally arrived in Christchurch, noting various signs of the recent earthquake damage. Tomorrow I will run through the city centre, and will, no doubt, see even more evidence.

I would like to thank Rebekah and Steve for putting us up in their very nice home for the next two nights. The hospitality of the NZ people continues to be unsurpassed. 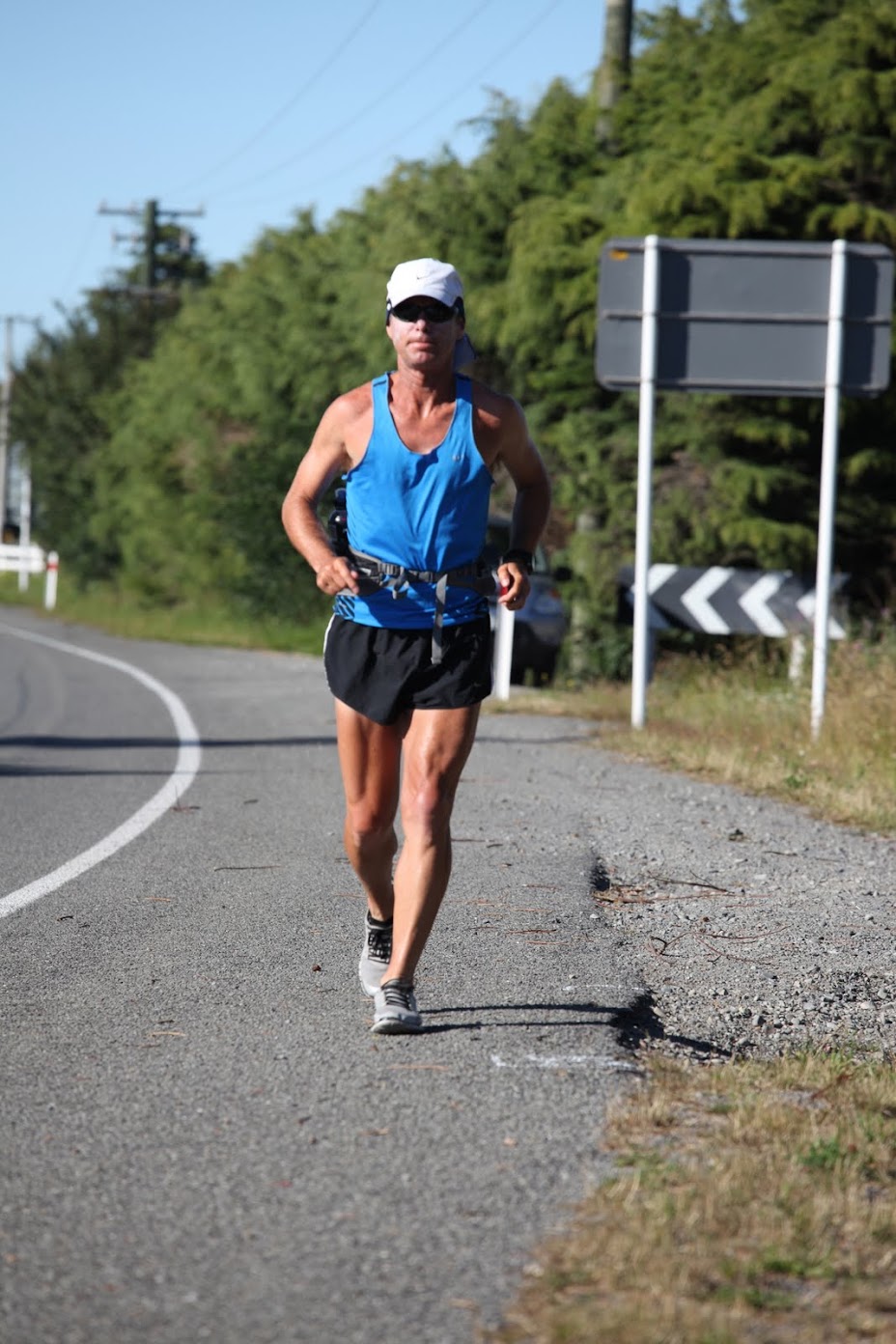