I had a very enjoyable run in the town of Gundagai this morning, including to the top of the local lookout – a very steep climb. It’s the sort of run on which I’d expect to see my heart rate reach a high level. And this time it did – 187 bpm. That’s more like it. But, as I said, it’s the consistency of the heart rate facility on the watch I’m more interested in. Today appears more real, but it’s hard to have confidence in a gadget that varies drastically from day to day when the workout hasn’t.

By the way, Serge Girard is now running in South Africa and Tony Mangan is in central China. Those guys really get around.

The following photo was taken somewhere in California – d’uhhhh. But I’m not sure whereabouts in that state. I think it was near Solvang, dubbed the most Danish town in the US. It’s not far from Santa Barbara. 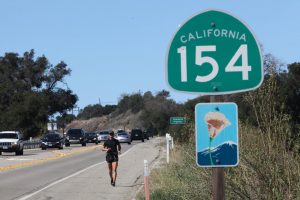 A very picturesque day, probably the pick of the days so far, with 59.7 km covered. The scenery was brilliant for running, with hints of many places around the world – France, Italy, Greece, the Dalmatian Coast, and parts of the US.

The weather has been extremely kind to me to this point. I doubt I could have covered as much ground as I have without these ideal conditions. I think I’m being spoilt, as the conditions will, no doubt, change for the worse before too long, and I will be back to shorter daily distances when it does.

Luckily I’m still feeling good, as I have set myself a daily average this week of 55 km, so that I can make Wellington by Saturday. So far I’m ahead of schedule.

We’re staying in Kaikoura tonight and tomorrow night, and what a great little town. We have been given two nights for the price of one by the the very luxurious Waves on the Esplanade, so many thanks to the management of this fine establishment.

A final comment on roadkill. Besides the ubiquitous hedgehogs, the second most flattened species is the ferret/stoat/weasel (I’m not sure which one it is here). These are wild here in NZ. They also appear to have poor road sense. I took a photo of one today which had been completely flattened, somehow without its guts spreading all over the road. Hopefully Carmel can upload the photo soon. A little macabre, but an interesting look all the same.