The latest of my articles for Azumio has now been published. You can read it by clicking on Azumio – Running vs Walking

It has occurred to me that virtually every time I suffer a minor injury, it’s during this time of year, from around December through to February. My recent calf strain was an example – and I have a slight niggle on the other side now too. And many of the Achilles issues of recent years began or persisted through this same period.

I’m pretty sure I know why. Living it up during the approach to Christmas, followed by the excesses of the next few weeks of holidays, leads to an inevitable gain in weight. In fact, this year, I’m now six kilograms heavier than I was at the beginning of December. It’s not a major worry, as I always lose the weight come February.

But such an increase in the extra load my lower leg muscles have to cope with is not trivial. These muscles have adjusted to supporting a certain weight each step I take, but now they suddenly have to deal with nearly 10% more. But it can actually be a positive, once the weight is lost and I’m running lighter once again. In the interim, however, the slight  muscles strains that occur due to the stress of additional weight are an annoying side-effect of enjoying myself too much.

Below is a blast from the past. This was taken on the road during the 2008 Tour de Bois. On the bike is Mother, one of the stalwarts of the Tour. I’d taken the opportunity to run (instead of cycle) from Grenfell to Gooloogong, a distance of 48 km, as part of my training for the upcoming Melbourne to Sydney run I was to embark upon in early 2009. Believe it or not, I actually beat Quinny into Gooloogong that day, and he was riding. 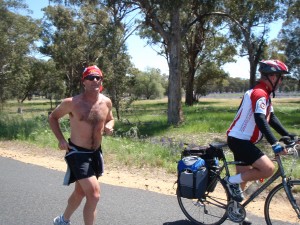 Today was a hard slog. It was the hottest day of the run so far, with the sun beaming down on me all day long. And there were lots of hills and mountain passes to traverse as well. But it was all worth it, as I passed vineyard after vineyard entering the Marlborough region.

Then the support crew surprised me with the accommodation they had arranged – a fantastic couple of units at the Marlborough Vinter’s Hotel. It’s superb. Thank you very much to all the staff here at this very luxurious establishment. I’m looking forward shortly to sampling some the world famous sauvignon blancs and pinot noirs of the region, kindly provided by the hotel.

I’m a little tired after a big week so far. In the first five days of this week I’ve chalked up 286 km. I’m looking forward to a bit of a rest now. Tomorrow I only have a short day of 28 km to the Wellington ferry at Picton. We will be saying goodbye to the South Island, and heading across the Cook Strait to the North Island.