I did another fast 20 km run this morning. In fact, it was the best I’ve felt on a run in many months, finishing the final kilometre in well under five minutes. Yesterday was also fast. I put it down to the weather conditions – cool and dry. I think my fatigue over the past few months has been as much due to the increasing heat and humidity in Sydney. Four days of running in much less oppressive conditions here on the Mornington Peninsula has lifted my energy levels immeasurably. I just hope I don’t go back to feeling the same way when I get back home. At least I’ll be fitter by then.

Here’s a photo of Carmel and me taken in Santa Barbara, California, during my run around the world. In fact, it was taken the day after my 51st birthday. We had celebrated the night before at a local bar with live music and I had then run a planned short day prior to lunch, where this photo was taken. 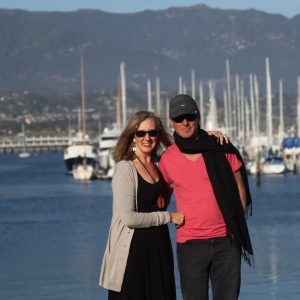 I am writing today’s blog from the Interislander ferry as we cruise down Queen Charlotte Sound on our way across the Cook Strait to Wellington on the North Island. For those not aware, Wellington is the capital of New Zealand.

I had a slightly earlier start this morning, to ensure I made it to the ferry terminal before midday. I was able to run right up to where the cars drive on to the ferries.

The landscape between Blenheim and Picton is as spectacular as any in NZ, and looks a lot like parts of British Columbia in Canada, including some completely bare hillsides from logging. This is one of the less fortunate similarities, but at least there is good evidence of replanting and new growth.

I would very much like to thank Interislander Ferries for providing our transport between the islands. These Kiwis never cease to amaze us. I am even able to watch the Tour Down Under on the TV while writing the blog via free Wifi. What more could a tired runner want?