I’m gradually upping my distances as I gain confidence my calf niggles have disappeared. I’ve run at least 100 km each of the past two weeks, and should surpass that again this week.

Just harking back to the issue of weight, putting on a few kilos over Christmas and the New Year does have its positives. Besides a period of  “living it up” providing a much needed psychological break, there are some physical advantages too. I’ve already detailed the downside, which is the increased load on the leg muscles during running, leading to a higher potential for injury. However, if you can navigate through this minefield, you’ll come through your “fat period” stronger than ever.

I treat the month or so when I’m carrying those extra kilos as a period of resistance training. Just as athletes sometimes wear weight vests or trail tyres behind them to create extra resistance during training, running with an additional 6 kg (as I currently am, although I’ve already dropped a kilo this week) increases my overall strength. Once I lose those kilos, the running becomes so much easier. But, as I said, you need to successfully navigate through the potential for injury for it to pay off.

I’ve found some new photos from my world run, mostly taken in the Arizona and Utah desert regions. Below is one of those, from just before I reached Monument Valley. I loved the big blue skies of the desert. 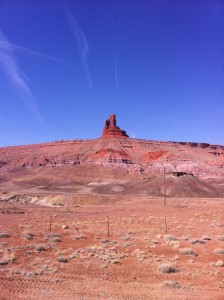 One of the great things about running around the world is that you know it will throw up some surprises from time to time. Today I learned that New Zealand has a desert. Nothing to compare with the Sahara, but a desert all the same. It is a dry treeless region in the shadow of the Mount Ruapehu volcano (2797 m), and I ran to the high point on the road that skirts the mountain (1085 m). It was quite an interesting run, and I hope to have a video uploaded soon. I expect this to be the highest point I will run to until I get to the Rockies.

Today I also encountered my first real rain of the run. It got very cold as I approached the town of Waioura, and the combination of being wet, cold, and with a strong wind whipping stinging rain in my face, it was the most miserable moment of the run so far.

I went into a diner in town, and could not get my money out, so numb were my fingers. I ordered a large hot chocolate, and held it in my hands for a several minutes before drinking it. The nice lady behind the counter went out back and brought me a towel to dry myself off with. After a mussel pie I was feeling a lot better, and finally ventured out to complete the day’s running on the desert road. I know I will get worse weather somewhere along the way during this odyssey, so it didn’t really phase me. I was, however, fantasising about a long and hot shower when I was at my coldest.

Just finally – a more philosophical comment. Today I passed two dogs tied up just inside a fence in the countryside. They were on short leashes, and had nothing to occupy them other than the sound of traffic passing by. They were so happy to see me (they went crazy when I went inside the gate, so I gave them both a big pat) that it was clear they were starved of affection. Although they were in good physical health, it was sad to see cases of animals that are abused mentally. Anyone out there with a dog, don’t forget they are very social animals and they need their minds to be occupied and exercised as much as their bodies. Being tied up all day with nothing to do is abuse. This is just one example of the many experiences I will have while running around the world.

Now, it’s off for that much awaited hot shower. And I am very much looking forward to the Thai green curry being prepared for dinner tonight by the wonderful support crew.

PS Many thanks to Fran at the Cafe Telephonique in Taihape for a great discount on a delicious and nutritious meal last night. I awoke today feeling very well nourished and raring to go.

In terms of the weather, this was one of the worst days of the world run so far. It was miserable, with cold rain coming down for much of the day. However, the last half hour saw the sun come out as I ran into the delightful and ancient town of Torres Novas.

During the morning, I was constantly passing runners who were warming up, yet they were in the middle of nowhere on country roads. I eventually found out what was happening when a police car came by, escorting racers carrying batons. It turns out, there was a long relay race, with many teams competing. Lots of spectators along the road commented that I was running the wrong way.

I reached a town where Carmel had stopped and located a street stall that was cooking Portuguese-style chicken – you can’t get more authentic than that. We were going to buy some, until the cook showed us the list of orders. We were going to have to wait an hour!!!! It must have been good.

It was great to get into town and warm up. As I mentioned, the town is great, the hotel is great, and the room has a spa and exceptional internet reception. What more can a weary runner want?

It really is a pleasure to run through these towns, with narrow cobblestone streets, houses that are hundreds of years old, and a castle perched on the high point, overlooking the town. That’s the panorama that greeted me on finishing this afternoon.

My thighs are still sore, and may be for a couple of days yet. Other than that, I’m feeling pretty good, but I hope the weather improves tomorrow. The forecast says it will.