Today marks a milestone – it’s the 6,000th day in a row that I’ve run without a day off. That’s almost sixteen and a half years. Will I make it to 7,000? I guess it depends on the results of my MRI, which I’ve now been told won’t be available until Feb 8. If I have a stress fracture or some other ailment that requires total rest, then I guess my unbroken string of running days will come to an end. Let’s see what happens.

Today’s world run posts are from Jan 27/28 2012, when I was running past Mount Ruapehu and on to Lake Taupo in NZ. Accompanying the text are some videos and photos from that time.

One of the great things about running around the world is that you know it will throw up some surprises from time to time. Today I learned that New Zealand has a desert. Nothing to compare with the Sahara, but a desert all the same. It is a dry treeless region in the shadow of the Mount Ruapehu volcano (2797 m), and I ran to the high point on the road that skirts the mountain (1085 m). It was quite an interesting run, and I hope to have a video uploaded soon. I expect this to be the highest point I will run to until I get to the Rockies.

Today I also encountered my first real rain of the run. It got very cold as I approached the town of Waioura, and the combination of being wet, cold, and with a strong wind whipping stinging rain in my face, it was the most miserable moment of the run so far.

I went into a diner in town, and could not get my money out, so numb were my fingers. I ordered a large hot chocolate, and held it in my hands for a several minutes before drinking it. The nice lady behind the counter went out back and brought me a towel to dry myself off with. After a mussel pie I was feeling a lot better, and finally ventured out to complete the day’s running on the desert road. I know I will get worse weather somewhere along the way during this odyssey, so it didn’t really phase me. I was, however, fantasizing about a long and hot shower when I was at my coldest.

Just finally – a more philosophical comment. Today I passed two dogs tied up just inside a fence in the countryside. They were on short leashes, and had nothing to occupy them other than the sound of traffic passing by. They were so happy to see me (they went crazy when I went inside the gate, so I gave them both a big pat) that it was clear they were starved of affection. Although they were in good physical health, it was sad to see cases of animals that are abused mentally. Anyone out there with a dog, don’t forget they are very social animals and they need their minds to be occupied and exercised as much as their bodies. Being tied up all day with nothing to do is abuse. This is just one example of the many experiences I will have while running around the world.

Now, it’s off for that much awaited hot shower. And I am very much looking forward to the Thai green curry being prepared for dinner tonight by the wonderful support crew.

PS Many thanks to Fran at the Cafe Telephonique in Taihape for a great discount on a delicious and nutritious meal last night. I awoke today feeling very well nourished and raring to go.

Just another standard day at the office – majestic scenery combined with the peace and quiet (except for passing cars) that comes with running country roads. I felt strong this morning, courtesy of the great Thai green chicken curry that Libby made last night.

I began the day at the base of Mount Ruapehu, which this morning was completely revealed, in contrast to yesterday afternoon when it was hiding behind a cloud cover. You really need to see a snow capped 3000 m high volcano in the flesh to fully appreciate it. And running alongside it for half a day adds another dimension again.

Descending from the volcanic plateau, I encountered a young hitch-hiking couple from the Czech Republic in the middle of nowhere. They asked me if I thought it was a good location to pick up a ride. Given we were 15 km from the nearest civilization, I replied in the negative, not that they had any option now. I bid them farewell and good luck. Hopefully they didn’t have to wait too long.

A little further on I picked up a stash of food and drink that was earlier deposited by the support crew. They had phoned me to describe where to find it. The process went over like clockwork. I did struggle a little, though, with the volume of food – tuna, hummus, two slices of bread, banana, and four cookies, along with a litre of drink.

I finished the day right on the shores of Lake Taupo. Tomorrow I will have a short day, running along the eastern shore of the lake and into the town of Taupo itself. 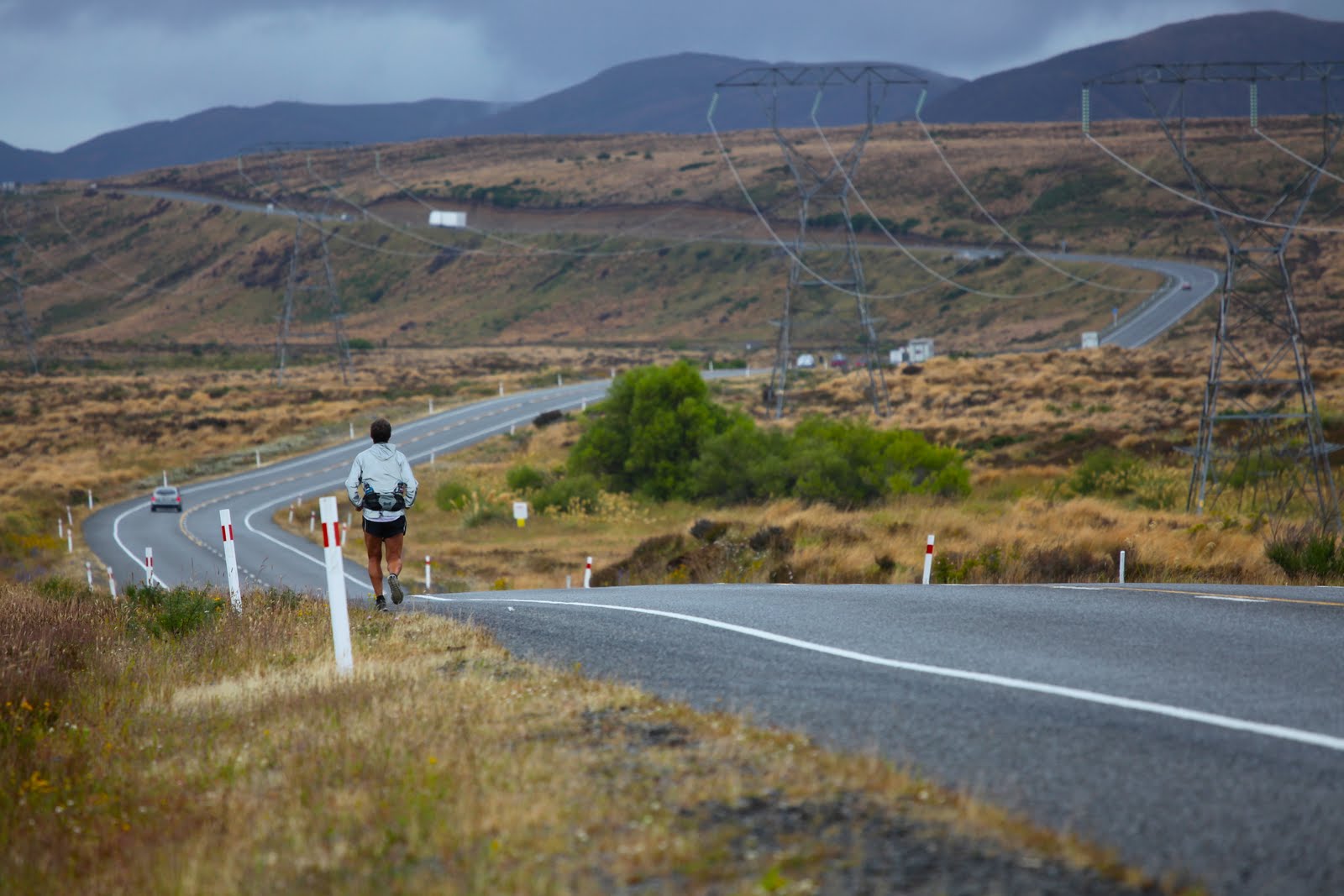 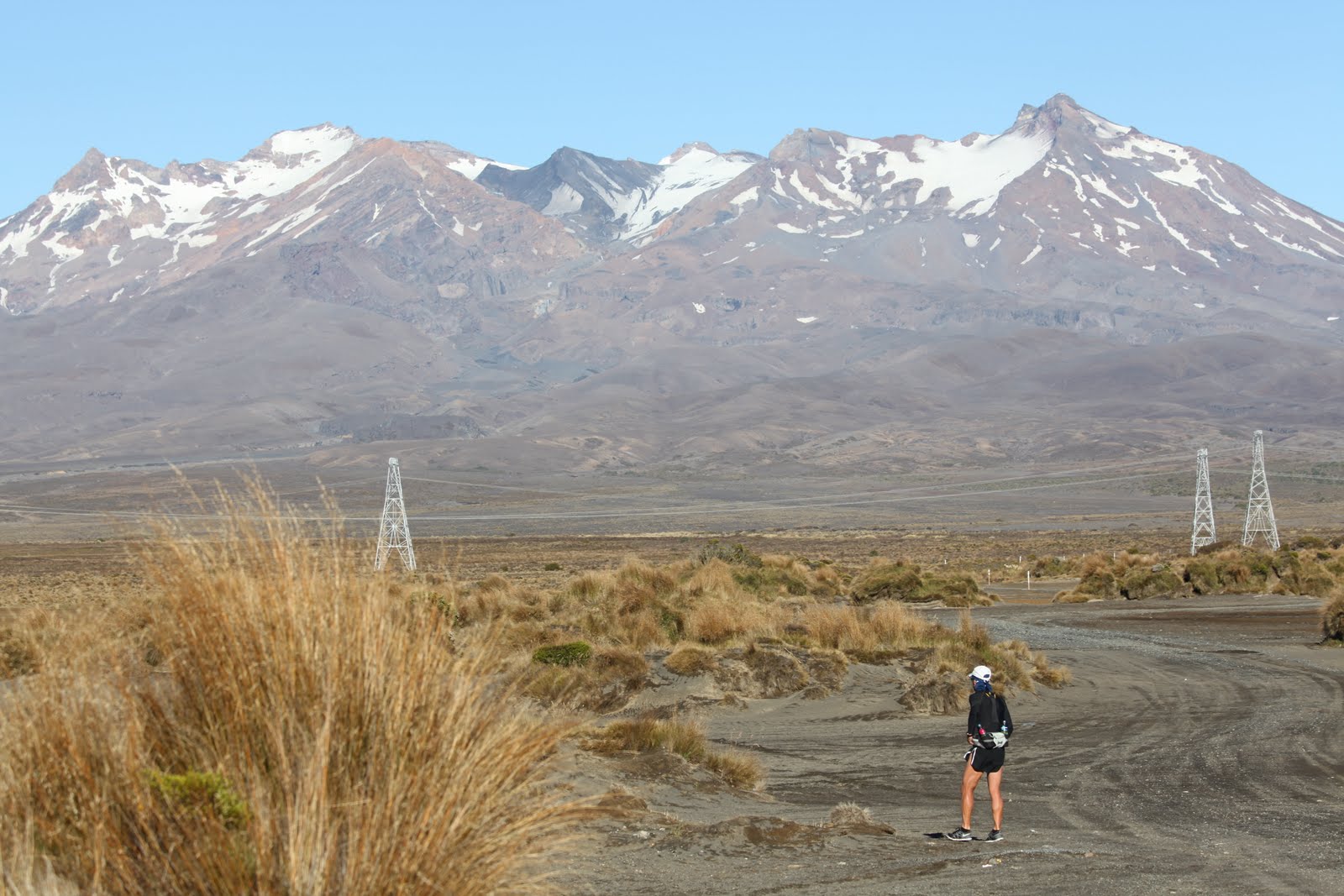