This week I’ve run 120 km, which is my biggest first week of the year since I started my world run in New Zealand in 2012. I feel I’m more motivated for the year ahead than I have been since the beginning of 2009, when I was training for the Run to the Sun on Maui.

This year, however, I have three races to aim at – the 32 km race across King Island, the 100 km Oxfam Trailwalker in Melbourne, and (probably) the Big Red Run in the Simpson Desert, a 250 km six day stage race. And then I’ll be cycling for five weeks in France and Italy, including all the big climbs in the Alps, Pyrenees, Dolomites, and Mont Ventoux. And that only takes me to August. It will be a big year.

This photo from the world run was taken on the coastal road west of Malibu in California. Although there’s a bit of traffic in the photo, it was generally very sparse. And the very wide shoulder, coupled with the constant ocean view, made it a very enjoyable place to run. 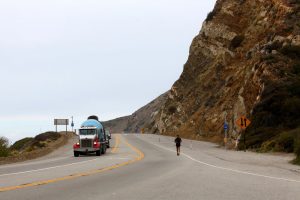 Had an easy day today. Normally 34.3 km would constitute a long day, but not on this odyssey. Funnily enough, I felt more tired than the previous few days. Maybe it’s catching up with me.

I’m very pleased with my first full week of mileage – 351 km. At this rate it will take a lot less than two years to complete the run but, to bastardize an old saying, “over-confidence comes before a fall”. So I’m not going to speak too soon.

Today was from Evansdale to Palmerston, and we are staying with Andrew and Cherie, friends of Heidi and Derek from last night. Once again, we’re very impressed with the generosity of the people of Otago.

Tomorrow I’ll be back into the longer distances.