Although I wasn’t feeling 100% this morning, the thigh strain was better so I decided to do a lap of Centennial Park. Two weeks ago I had run 13:51 and suffered a bit. Today I ran 13:41 and felt much more comfortable. I can’t quite explain the uneven splits, however. I mentally break the circuit up into four segments. Compared to last time, the first stage was very similar in time, the second was much faster, and the third was noticeably slower, although I felt I was going faster. The big positive was that I ran the last stage in 2:51, which is only four seconds slower than one of my best ever laps, which I ran in 1997 (a 12:57).

I have received the results of my recent medical – everything was pretty much fine. I was especially pleased with the 3.4 for my cholesterol ratio. A couple of years ago, after eating innumerable burgers during the US leg of my world run, that number was up around 6.5.

The photo below was taken as I reached the Utah border with Arizona back in late March 2012. Monument Valley lay directly ahead. You can even see some of the “monuments” underneath the sign. 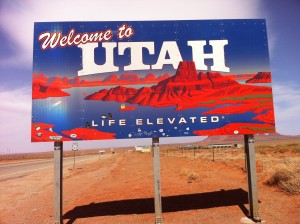 I’ve often said the mental side of this run is the harder part, but some days are just as hard physically. I am now carrying a thermometer, which I keep in the shade in my belt pouch, allowing me to know the real temperature where I’m running. Today it reached 98 F (37 C) and stayed there most of the afternoon. And I’m running in the direct sunshine (much hotter again), so you can see what I mean about the physical side being demanding. And the heat makes the roadkill smell even worse.

No internet on this day, as I was running in the middle of the Nullarbor on the second longest stretch of straight road in the world.