Having run 120 km this past week, I may have a bit of an easier upcoming week. I won’t back off to much though, as the 12 hour run is only a month away. However, I do intend to do a 35+ km run tomorrow. It will be in the countryside, meaning it will be more enjoyable than usual.

Here’s a photo from the world run as I headed south along the banks of the Mississippi in Wisconsin. It was very hot and humid at the time, but the view of the river made it much more bearable. 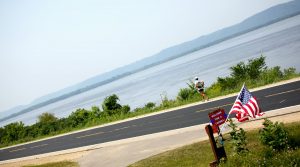 On Tuesday I crossed over from Western Australia into South Australia, which included an hour and half time zone change. Almost instantly the vegetation went from one of occasional trees, to a treeless plain covered with low scrubby bushes. This is the real Nullarbor. I have heard people say that Nullarbor is an aboriginal word for no trees – well, maybe, if the local indigenous people spoke the same language as the Romans. Nullarbor (null arbor) is actually a Latin word meaning “no trees”. That’s the case now.