I have now entered the tapering phase for the Sutherland to Surf race on Sunday. In some ways I’ve had a three week taper, but now it gets serious. Very short and easy runs until Sunday.

Most people find the taper a very enjoyable time, feeling great and having lots of energy. I’m often the reverse. I usually feel sluggish, at least early on in the taper period. But this strange counterintuitive reaction to relative rest doesn’t seem to affect me on race day. My legs normally feel pretty good during  the warmup for a race. I hope that’s the case on Sunday.

For what it’s worth, my time prediction for the hilly 11 km course is around 42 minutes. Last year I was just over 44 minutes, but I’m pretty sure I’ll beat that comfortably this time. Unfortunately, I’m not nearly so confident of running 54 minutes in the City to Surf on August 9.

Today’s photo keeps with the theme of state road signs. Last time it was when I entered New Mexico. This time it’s from when I left New Mexico. If you look really hard, you will see part of the Rockies in the background under the sign. By the way, New Mexico is a truly great place to run. 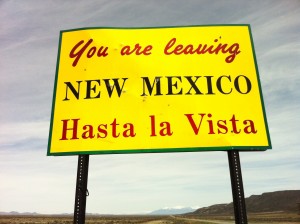 Another hot one, as I navigated myself across Chicago from north to south. This is one big city, and I spent the whole day running through suburbia, including 32 km on one straight street, Pulaski Road. It was 98 F (37 C) in the shade – far from ideal conditions for traversing a big city.

PS It was great to hear about the mighty South Sydney Rabbitohs’ stirring victory over the forces of darkness (aka the Roosters) in last night’s Monday Night Football. They are having their best season in many years, and it’s especially satisfying to win the local derby.

I continue to be dogged by long stints without phone or internet reception. It will probably persist for a little while yet, although I’m starting to reach the land of the living again, so the problem should decrease in frequency soon.

Sunday began with us singing Happy Birthday to Michael in the van. I won’t give away his age. We gave him his present around the early morning campfire.

The run was uneventful, although Chook and Silvia both did some running with me – 17 km in Chook’s case. Jeff rode the 47 km to Nundroo. I have now reached the agricultural zone, with very green winter wheat fields lining the road. It’s starting to look more like the eastern states.

Monday saw me doing a lot of running on gravel roads. The first 24 km was with Chook. He’s doing well to run that far on little recent training. Carmel left us a stash of food and drink along the way, marked by a pink balloon, making it easy to find.

I headed into the seaside village of Fowler’s Bay, had lunch at the camping ground, and headed out again on the dirt road. Silvia ran the first 10 km with me, after which I continued another 20 km to finish the day. We saw a dead wombat on the road, which is always sad – they’re such cute and friendly animals.

Jeff and Michael went out on a charter boat and caught heaps of snapper, all over half a metre long. Guess what we had for dinner on Monday night?

Today was another long one, as they will be for a while. A 56 km run now seems quite passé. Chook and Silvia ran the last 17 km with me, including past a hot pink windmill. Michael rode 47 km in tough conditions – he suffered a bit, but not enough to stop him playing golf in the afternoon.

The countryside is now intensely green, courtesy of young wheat. In fact, it’s such an emerald green, it would be a match for the homeland of such magnificent Irishmen as Tony Mangan, Fergus Owens, Ray Alcorn, Sean Barrett, and Rick Curran.

Tomorrow is a special day. You’ll have to tune in again to find out why.