Apologies for the paucity of blog posts recently. Besides the fact I’ve been travelling, my computer also ran out of battery and I didn’t have the power cord with me.

As predicted, I’ve had a bit of a lighter week, covering 100 km these past seven days. This coming week will be bigger, including a long run of about 50 km. There’s less than four weeks now till my 12 hour event, so I need to make the best of the time.

Here’s another shot from the prairies of South Dakota. It was a little cold on this occasion, but soon after the temperatures started to climb. 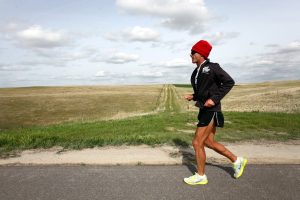