I had a gentle run this morning, feeling pretty good – not too sore at all. The calves are a bit tight, but that’s to be expected given I haven’t recently run that fast for that far and on such a hilly course.

I was wrong about Steve Moneghetti winning the race yesterday. He actually placed 10th and I was 81st of the more than 6,000 competitors. Steve won the 50-59 age group and I was third. Below is something I’ve never experienced before – a results list with Moneghetti and myself together in the top three. Gotta be happy with that.

For those who don’t know who Steve Moneghetti is, he used to be one of the best marathon runners in the world, and still holds the City to Surf record with 40:03.

Today’s world run photo keeps with the theme of the prairies. This one was taken as I approached the small South Dakotan town of Blunt, east of the state capital, Pierre. I always loved passing through these little places. I recall being asked where I was from by a couple of kids in this town as I was buying a drink. 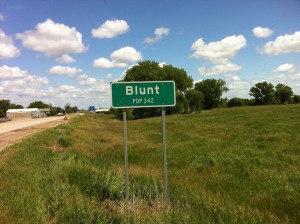