I should end up covering 140 km this week. That will be my biggest week since last November. I was tired for three days after my 55 km on Tuesday, but this morning I felt much more energetic again – despite the fact I didn’t get to bed until almost 2 am after watching the Tour de France. I’m now intending to do a super long run on Monday, followed by a moderate long run next Friday. It will then be just two weeks till the 12 hour run.

This photo is typical of what one can expect during a world run – long straight roads with not much to look at. However, given that every moment of every day sees you somewhere different, it simply doesn’t get boring. 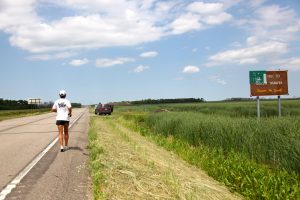 Despite the temperature reaching 40 C today (in the shade), I again benefited from the cloud cover and breeze.  In fact, I was having quite a good day, at least for the first three-quarters of the run.

And to top it off, the cloud cover lifted and the temperature went up by about ten degrees. Added to this, the traffic increased significantly on the road (I think there may have been a shift change at the nuclear power plant I had just run past) at just the time the paved shoulder disappeared completely. I had to run on an extremely rough gravel surface by the side of the road, and the uneveness made the ankle hurt even more. Yes, it was a very tough last quarter to the day.

I reached the 90% mark of my journey today. It certainly feels good, knowing I now have just 10% left to run.

It was a lovely day, but my feet ached for some reason. Hopefully they will feel better tomorrow. Jeff ran the last 7.5 km, and Michael rode 45 km.

We’re free-camping again tonight. We have a beautiful little spot, nestled among a grove of trees, within green fields of wheat. Michael made a great fire, and we’re gathered around it, enjoying a beer. The sun will set soon, and dinner will be cooked on the open fire. It doesn’t come much better than that.

I haven’t been overly original or imaginative in my blogs of late, but I put it down to tiredness. I’ve averaged 55 km per day so far for the month of July, which is probably a record for this run. I’ll pick up in enthusiasm as I get nearer the end.