Still a bit of residual fatigue and soreness in the legs, although it’s just about all gone now. I guess I must have pushed harder than I realised on Sunday. Or maybe it was the fact I was trying to compensate for tightness in my calves during the race that has caused other muscles to suffer more than is usual?

Anyhow, I’ll be doing a bit of a longer run tomorrow with lots of hills, then a speed session on Monday. Next week will be a fairly hard week, before then tapering again for the City to Surf the following week. It’s my aim to fit in a Centennial Park and a 3 km time trial before then, to both sharpen my speed and as a final indicator of the pace I should attempt in the race.

Just one more prairies photo from the world run in late May 2012, again illustrating the monotone nature of the landscape. I’m glad there was generally an old road paralleling the freeway in this region, so I didn’t have to contend with a lot of traffic as well. 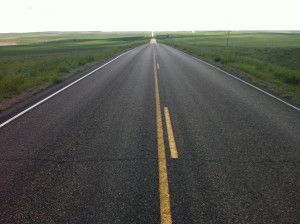 I awoke this morning and sat on the side of the bed – the region where my hamstring attached to my buttock was extremely sore. I was concerned. Not only for my hamstring and ankle, but also because of the 105 F (41 C) temperature that was predicted.

The heat, however, was a little harder to manage, although I am finding I’m handling it better now than I was a few weeks ago – such are the benefits of acclimatisation. It reached 53 C (127 F) in the sun this afternoon at 3 pm, yet I wasn’t too seriously stressed. Carmel was giving me drinks each two or three kilometres, though.

And then, just two kilometres later, I passed another big milestone – 6,000 miles for the journey, which means I’m now well past one-third of the way around the world. It doesn’t seem that long ago that I passed the one-quarter mark.

Had a better time today, with a long run in the sunshine through lovely farming countryside. I reckon the delicious chili con carne Carmel made last night was the difference.

Michael passed me early on, riding the 56 km to Kimba. Jeff ran the last 15 km with me. He has now reached 96 km in total, passing The Hud, and is closing rapidly on Dave and Barry. He should move into second place on the honour roll tomorrow, but has a long way to go to reach Chook’s 262 km.