A big start to the week – I ran 66 km today, which is my longest run since the 108 km I covered in Florida in November. I was tired at the beginning, so I was very pleased to finish quite strongly. In fact, my energy levels hardly varied all day – a bit tired at the start, a bit tired in the middle, and a bit tired at the end.

One again, I ran a loop of the 4 km course I’ll be using for the 12 hour even on August 12. I did this between kilometres 53 and 57 in today’s run, and managed to do so in 21:38. That was 24 seconds faster than the corresponding occasion last week. I reiterate, however, I will not be running that fast for 12 hours.

This photo sees me running through Colorado, with the peaks of the Rockies in the background. I never found the Rockies very steep. The peaks themselves would have been steep, but I didn’t have to run up those. The highways through the mountain range (and between the peaks) were much gentler. 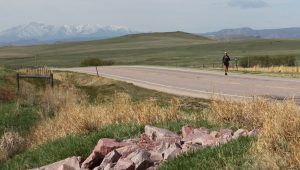