After last week’s 55 km long run I felt tired for a few days. However, I’ve felt much better in the two days since this week’s 66 km run. That’s a good sign, but it also makes training more enjoyable. I intend to do a 40-45 km run on Friday, after which I’ll have two weeks remaining until my 12 hour run on August 12. At this stage I’m pretty much on track to
beat my PB of 108 km.

This photo was taken in the grain belt of Illinois. There were plenty of silos like this throughout this region of the US. It would have been a very pleasurable place to run had the temperatures not been so extreme at the time. 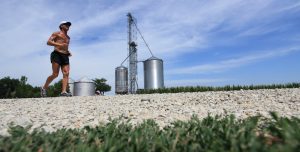