Yesterday I visited a nearby store to have a look at the latest Garmin products for running and cycling. I wasn’t actively looking to buy anything, but it was a good chance to catch up on the state-of-the-art in this area. Which brings me to a topic I think is worth knowing about if you’re contemplating buying this sort of product.

I have mentioned this issue before, but will elaborate a little now. When I began my world run I was using a Garmin 610 watch to record all my data, downloading it this web site each evening. The watch did exhibit intermittent problems during the downloading of data, but otherwise it performed well in the early days. However, after a few months of sweat running on to the recharging terminals, the watch eventually failed completely. I wasn’t willing to risk the same thing happening again, so I bought a Garmin 800 cycling device instead, holding it in my hand while I ran. Yes, believe it or not, I actually held the gadget while I ran a further 16,000 km.

The 800 worked without apparent issue, at least in regard to downloading data and recharging, doing so both quickly and reliably. It still does. However, I did notice during the world run that, whenever, I had a secondary source of measuring how far I had run, the 800 always seemed to be showing a lesser distance. Initially I assumed the secondary sources (Google Maps, i-Phone apps, highway markers, car odometer etc) were overestimating the distance. But when the same thing continued to happen, I started to question the situation – could all these other ways of measuring the distance always be wrong? The more obvious answer was that the Garmin was underestimating how far I had run. And it wasn’t trivial, often up to 5% or more of what other sources were indicating.

In recent times I’ve been running with the same device. However, there are some sections of courses near home that I have very accurately measured in the past. When I cycle these sections, the Garmin 800 is generally very accurate (one must always accept small discrepancies of 10 metres here and there). However, when I run exactly the same course, it is always short, usually between 3% and even up to 10%, although I estimate the average shortfall is about 5%.

Admittedly, the 800 is designed as a cycling computer, and it performs quite accurately when operated in clear view of the satellites and at typical cycling speeds. But it doesn’t perform accurately when held in my hand and operated at running speeds. I’m not sure if my hand is blocking the signal from the satellites, or if the internal system is calibrated for a faster speed, or a combination of both? Either way, I can live with this, as there are dedicated Garmin running watches which, I assume, are accurate. However, it’s something readers should be aware of, if you’re thinking of using a cycling device for running, and you require a high level of accuracy.

I don’t worry too much about it while training – it just means I’ve run further than I thought. But there is a major implication here for my world run. If the device was underestimating the daily distance I had run by, say, 5% over the final 16,000 km, this means I actually ran about 800 km more than was required. That’s more than two weeks of extra running. It’s too late now, but it is something I will certainly take a lot more seriously if I ever do another big journey run.

The world run photo for the day was taken as I crossed the border from Wyoming into Nebraska. I assume this was once some sort of border or quarantine post, but it’s clearly a long time since it’s been used. 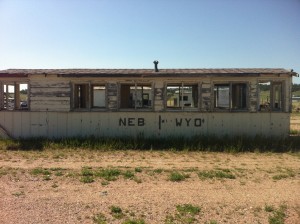