As I thought, this has been my biggest mileage week since I finished running around the world – 175 km. It included two long runs of 66 km and 44 km, both at good pace. In fact, if I maintained the pace I averaged on Friday for the full 12 hours on August 12, I’d end up with around 126 km. I don’t think I’ll manage that though.

From here on I’ll be gradually toning it down, with a two week tapering period. I think I might do a 30 km run later this week, but in general I’ll be concentrating more on speed than distance.

Below is another photo from the prairies of South Dakota. This was taken in late May of 2012 – a time of the year that is perfect for running in that region. It wasn’t too hot, nor was it cold. And the days were generally sunny. The one down side was that the snakes were starting to come out of hibernation. 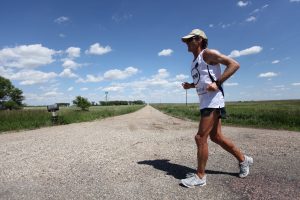 Sorry everyone, I just wrote a long blog and lost the lot when the internet cut out. I will just write an abridged version now.

Today included seeing lots of dead armadillos on the road – they look like a cross between a possum and a tortoise. I also reached the 10,000 km milestone, and in just seven months. The girls produced a banner to include in the photos. Have a look at these on the Home page when they’re up.

Thanks to Aaron from the Longhorn Motel for a generous discount on the room rate tonight. It’s much appreciated.

I passed the 24,000 km milestone early in today’s run. Not far to go now. It was a hilly run, through classic Clare Valley wine country – doesn’t get much better than that.

Quinny and Reefton drove me out to my starting point today, and Bernie and Lesley acted as support crew this afternoon, providing me with a drink and then picking me up.

Carmel was taking some photos during the middle of the day, when she met Scooter Smith from Cardinham Estate. He had seen me on the AFL Footy Show, and ended up giving Carmel a whole case of red wine. What a fantastic gesture. I’m looking forward to trying them over the coming days and weeks. We also received a case of wines from Kemeny’s in Bondi a few weeks back. I’m lucky to have such fine running fuel provided free of charge.