Sorry for the recent lack of posts. I’ve been away and without internet. I’ve been enjoying running in the Southern Highlands of NSW, around the Bowral region. It’s only around 600 metres in elevation, but I guess that provides a very slight altitude training effect.

This week I think I’ll have a crack at another 3 km time trial and see if I can improve on the 10:16 I ran the week before last. It’s now starting to get towards the pointy end of this City to Surf campaign, when improvements are harder to come by and tend to be more incremental. So I’ll be happy with any time that’s faster.

Yesterday I went into a book store in Bowral and saw The World at my Feet on the shelf. It was a little surreal, but nice all the same.

The world run photo today is from the Utah town of Bluff, just past Monument Valley. The rock pillars were amazing. 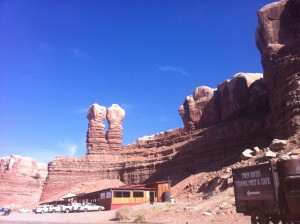 Sorry to keep harping on about the heat recently, but today warrants it. It was predicted to be the hottest day of the week, and it was. In the sun this afternoon, the thermometer read 137°F (58°C). I’m not sure what the official “in the shade” temp was, but it was well over 40°C.

I feel I have now managed a bit of a “bucket list” achievement – to have run over 50 km in temperatures reaching 58°C. I would never have considered it possible, and I hope I don’t have to do it again.

Today I passed by the roadhouse of Madura. I was surprised to come to the top of a pass, and run down the escarpment to a lower plain, on which the roadhouse sits. The afternoon was spent running alongside the escarpment, which used to be the coastline, before sea levels dropped during the last ice age. There are thousands of fossilized sea shells scattered all over the ground, as this used to be the sea floor. I had to start ignoring them, as I was getting distracted looking for interesting fossils, instead of concentrating on running.

The Madura caravan park have been very generous in giving us the accommodation for free tonight. I quite like these all-in-one roadhouses, with their restaurants and bars, and we’re all looking forward to a tasty meal tonight.