I ate something on Sunday night to which I must be allergic (I think it’s some sort of flavour enhancer additive that’s put in food). Yesterday morning my face had swelled up and I was feeling decidedly fatigued and listless. This morning I was a bit better, but still feeling the after effects.

So I’ve now surpassed the 10:10 I predicted I’d need to have any chance of beating my age at the City to Surf. If I can get that down to 10:00 over the next month, I feel I’d have a good chance. Let’s see how I go.

Today’s photo is another from the desert as I approached Monument Valley. I was never short of spectacular scenery in this region. 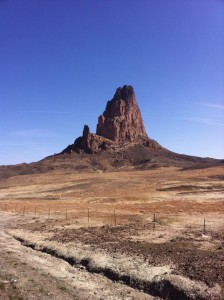 For something different, I called Carmel early during the run (she was still in the hotel room) and got her to place her phone near the TV, which was showing the final part of the first mountain stage of the Tour de France. I put my phone on loudspeaker and listened to the commentary of Phil Liggett and Paul Sherwen as I ran. It was a very exciting finish too.