Another 3:33 for 1 km this morning – same as on Monday. I guess it was a better effort, as I had already run 70 km from Monday to Wednesday and was feeling quite fatigued. I think I’ll take a break from the 1 kms for a while. I might up the distance of the time trials for a while. I’ll come back to the 1 km distance in a month or two.

Today’s video is from the Nullarbor, between the WA roadhouses of Madura and Mundrabilla. About a week earlier we’d met a couple, Elle and Pete, who we kept bumping into across the Nullarbor. I popped into their camp on this occasion, with the support crew of Jeff, Michael, and Carmel already there.

As for the photos, there’s one of Carmel and me displaying some of the wine that Kemeny’s Wines had delivered to us on the Nullarbor – amazing. We had also been joined that day by our friends Jane and Peter, and there’s a photo of Peter, with Jeff on the bike, catching up with me on the road during the day. Also one that Carmel took of my legs to highlight how lean they were at the time. And a map showing my route through the US from San Francisco to Wisconsin, reaching Lake Oshkosh on this day in 2012. 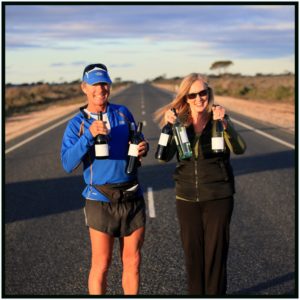 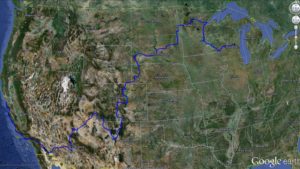 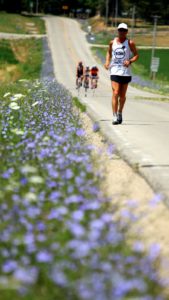