It was a big weekend. After Friday’s tough hilly 50 km run, I cycled 135 km on Saturday, which included a very steep 5,000 feet ascent. The climb up Jamberoo Pass was extremely hard, but at least the descent was fun.

The net effect is that my glute problem appears to have been cured, and the chronic heel issue is also barely noticeable. So, while I won’t be in peak condition for the Big Red Run starting on Saturday, at least I should be able to get through it without feeling pain (unless I push too hard and bring the pain on myself).

If you’re able, please think about making a small donation to my charity fund raising efforts by clicking on https://bigredrun2017.everydayhero.com/au/tom-s-next-step. Remember, you can claim it on your tax return, so it will cost you less than you think.

Here’s another photo from a snowy day in Germany during my run around the world. At least here I was on a cycle path, and one that had been cleared. This was as good as it gets in conditions like these. They were still tough days of running, but you can’t complain about the weather on a world run – you encounter all types. Your reaction to it is entirely within your own mind. 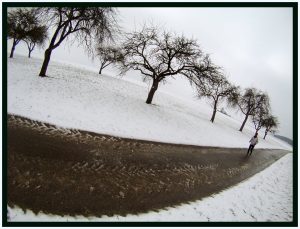 I began on the dirt road I finished on yesterday, after a night of heavy rain. Dirt roads and heavy rain don’t mix well, and I was constantly dodging puddles. And when I stopped, the mosquitoes were unbelievable. Even with repellent on, they were still having a go. After 23 km of this, I finally reached a paved road, which seemed to deter the mossies.

Sorry to have missed yesterday’s blog. If you haven’t already, have a read of that one first.

I began this morning in thick fog, with Grace running the first 6 km with me. She had also run the last 5 km with me yesterday, though in very different conditions.

The girls went ahead into Coolgardie fairly early, and dropped off a lot of drinks and food along the way. This worked well. Carmel picked me up later in the day, about 60 km west of Coolgardie. I will run into Coolgardie tomorrow. The tracker, however, is showing me there already, but my official position is 60 km to the west.

I did it a bit tougher than yesterday. It was not an easy day, with very long straight sections of road, bordered by scrubby bush. There was not a single building along the whole course today – it was very remote. There were probably as many road trains as there were cars on the road, but the traffic was not heavy.

Due to the commute to the start this morning, I didn’t finish the 60 km until just after dark. There is plenty of room for me to run on the side of the road, but I still seem to spook the drivers when they see me emerge into their headlights.

I have a long commute to the start tomorrow, so will probably finish in the dark again, but at least I will be finishing at the motel.