I’m amazed at how much progress I’ve made with this injury in the past week. There were daily improvements during the first two weeks, but nothing compared to the past week. I guess that first two weeks were about laying down new muscle fibres over the tear, and this latter week has been about strengthening those new fibres. I still have a little way to go before they’re back to full strength, but I’m very happy overall with my rehabilitation.

I’m starting to think again about what’s next? I’m struggling to feel motivated about the City to Surf. I might set a few minor goals around time trials in Centennial Park. If that goes well, maybe I’ll run the C2S.

Below is a typical photo from the pampas in Argentina. The fisheye view is due to the GoPro camera. These are expansive flat plains where the gauchos (South American cowboys) ply their trade. And this is the main road across the continent. Very enjoyable for running, so long as the grass on the shoulder wasn’t too long. I often had to venture on to the shoulder to avoid oncoming traffic. 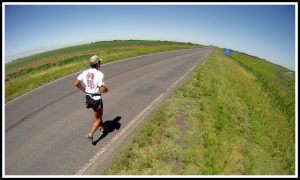