I saw a physio this morning. It does appear I have a muscle imbalance that has led to a weakness in my right side around the pelvic region. I need to get this strengthened. But it’s also a case of connecting my brain to the muscle and engaging it unconsciously. That’s the tricky part.

Anyhow, besides that problem, I’ve recovered well from the 53 km run on Wednesday. I’d be very happy now about my running if it weren’t for this problem that’s causing weakness in my stride and, consequently, an ache and a noticeably slower pace.

This photo was taken by Carmel in Germany, not far from the city of Regensburg. It must have been very costly to purposely make a twisted building like this. It was on one of the best weather days I experienced while running through Germany on the world run. 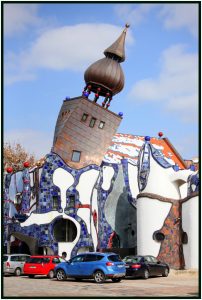 But wait, there’s more – throw in an ultra quiet back road to the mix described above, and you have running heaven. I found such a road at the 20 km mark, and stayed on it for the rest of the day. Why would I leave? I was able to run in the middle of the road all day long which, being the flattest part of the road surface, is definitely my preference.

In the past week or so, I’ve been exposed to wild pheasants for the first time. These birds, which are far from the most gainly in flight, are constantly being startled by me running by their nests in the long grass by the road. They burst out from their cover, flying wildly in seemingly random directions. I don’t think they’re too smart, as many of them obviously fly straight into the path of oncoming traffic, judging by the amount of pheasant road kill I’ve observed.

Speaking of road kill, I saw my first chipmunk today. It had sadly met an untimely demise. I also saw what looked like a giant ferret, but have been informed it was a musk rat.