I’ve followed up last week’s 140 km with another 120 km this week, so I should be reasonably well prepared for next week’s Royal Double Ultra. I spent yesterday cycling around Berry, including the ascent of Berry Mountain. I haven’t cycled for a few months, so the 10% gradient of the mountain taxed my legs quite a bit, but it’s all good training.

The region north of Minneapolis suffered severe flooding in June 2012 when I was running there. It took many days for the flood waters to subside, so I found myself with wet feet a lot of the time. I even had to wade waist deep through flood waters at times, as you’ll see from the appended video. The policeman (in the first video) calling me back, informed me the bridge ahead, which was impossible to see below the water, had been washed out. Luckily I followed his instructions and went back. The other video illustrates some of the damage the floods did. And, as you’ll see from one of the photos, a restaurant bar called the River Inn, really had let the river in. 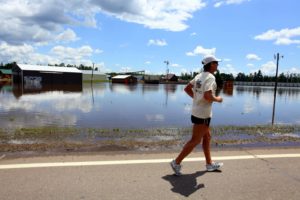