I’ve now officially entered the Royal Double Ultra race, to be run on the weekend of June 29/30. It consists of 50 km of racing on each day. However, I’ll simply be participating without racing, due to my lack of preparation. My aim is to enjoy the event to the max.

The reason for my lack of preparation goes back a while. In March 2016 I had a heavy fall off my bike on a wet and slippery roundabout. My right hip was very sore, but I assumed it would simply heal. The soreness went away, but it was only two years later that I was diagnosed with a “frozen” sacro-iliac (SI) joint as a result of the fall. This joint does, in fact, normally move a little with every step, but mine wasn’t.

Over time this caused problems, but not before I competed in four major runs – a 3:27 in the Sutherland Relay for Life Marathon, a 114 km time trial in 11:56, a 2:30 in the King Island 32 km event, and topped off with the 250 km Big Red Run in the Simpson Desert, at which I placed 3rd. And that doesn’t even count the training I did during that two year period.

It all added up, and the cumulative effect of so much running with faulty biomechanics manifested itself as, not only a troublesome hip, but also the Achilles problems I was having. It all appears back to normal now, but it hasn’t left me enough time to get ready for racing, so I’ll treat this event as a gentle reintroduction to competitive running.

Today’s video and photos from seven years ago are from the eastern part of South Dakota, not too far from Sioux Falls. In fact, a TV news crew from Sioux Falls came out to do an interview north of the town of Watertown, as you’ll see. The news clip states I’d be the first to run around the world, which wasn’t quite true. While that may have been the case according to Guinness World Records, that organisation is not the authority on running world records. It’s the World Runners Association that adjudicates on world records for running around the world.

As it turns out, I became the third person to run around the world fully documented, setting a new record for “fastest” in the process. There’s also video from when I reached a quarter of the way around, and a photo of a lunch that Carmel prepared on the road. It was delicious. 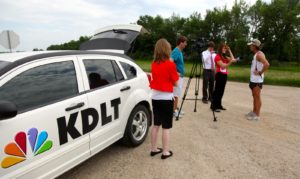 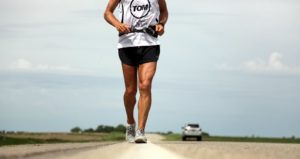